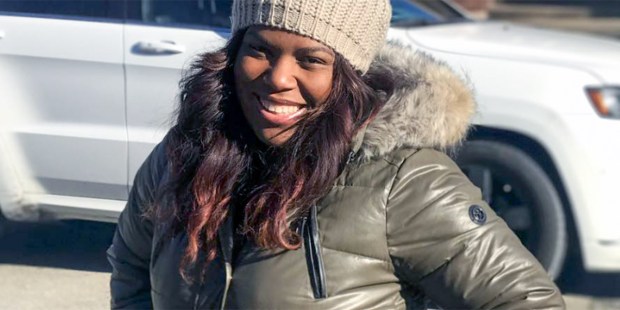 Candice Payne went to great lengths to make sure more than 70 people didn’t freeze to death.

In times of emergency we often get to see the very best in people. This was the case with last week’s polar vortex that saw temperatures dive to minus 31 degrees and 21 people lose their lives due to the freezing weather conditions. While many of us could stay wrapped up indoors, not everybody had the security of a warm and cozy environment.

Thankfully Candice Payne, a real estate broker from Chicago, made sure that some of the homeless in her hometown were taken care of. Through her determination, compassion, husband’s support — and her American Express card — the 34-year-old made sure that more than 70 homeless people were given shelter and food during the cold snap.

But it wasn’t easy. As Payne shared with Today, she faced a lot of rejection from hotels when seeking help for these marginalized men and women. Luckily one hotel called the Amber Inn was “nice enough to allow me to buy the rooms,” Payne explained.

Payne made a plea for help on social media to help ferry the homeless to the hotel, “I’m renting 20 hotel rooms for the homeless. If anyone has a van or a passenger van that will help me transport the homeless to the hotel, I’ll pay you,” she explained in an interview on NPR. Fortunately, many other generous souls put their hands in their pockets and came to help and offer further donations so Payne was able to book a total of 60 rooms for 5 nights, including a warm meal, so the homeless would be both protected and fed.

It don’t take much to be a blessing to someone else! It’s freezing cold and deadly temperatures outside! For the people who has no where to go, no money, no food, family disowned them… need help it’s not much but to get them out the cold, feed them, and provide them with warm clean clothes is a start.

The next difficulty she came across was persuading some of these homeless men and women to desert their spots. They were anxious about leaving behind their sole possessions and familiar areas, but the kind-hearted Payne reassured them that she would personally replace anything that got lost or stolen. Despite the obstacles she faced — some of the people had disabilities, and one was pregnant — Payne helped them find warmth and safety.

Payne’s heroic actions have had a deep affect on her. “They’ve definitely changed [my life] because you don’t know until you’re either in it or next to it,” she shared with the radio station. She now wants to find some more permanent solutions to help men and women who find themselves on the street.

Read more:
A genius, dignified way to help the homeless this winter