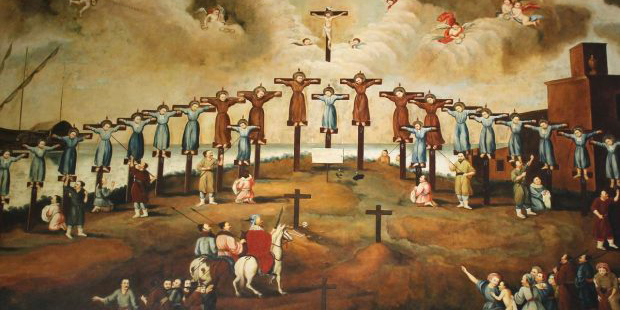 There is no more eloquent proof of the truth of faith …

Through the law I died to the law, that I might live for God. I have been crucified with Christ, yet I live, no longer I, but Christ lives in me; insofar as I now live in the flesh, I live by faith in the Son of God who has loved me and given himself up for me. – Galatians 2:19-20

When St. Paul wrote his letter to the Galatians, he was reaching out to a community of Christians he had known personally, and he offers an impassioned appeal for them to live according to the message he had preached to them.

At some point, new teachers had come to their community and they had attacked Paul’s character and teachings. In no uncertain terms, Paul defends his authority as an apostle and teacher and he reminds the Galatians that Christians live only by faith in Christ, who is the centerpiece of our faith.

When Paul speaks of Christ, he is rejoicing in the love that he has received from Him, and experienced personally. In Saint Paul and the New Evangelization, Ronald Witherup notes, “This is the kind of experience of love that is obviously comforting and reassuring. But Paul did not have a simplistic view of what receiving this love demanded of him. For love freely given demands a free response.”

For people confronted with the reality of suffering, the witness of Christ Jesus’ self-offering love can be a source of comfort and encouragement. This is why, for so many Christians throughout the centuries, the image of Jesus on the cross is the most beloved and recognizable symbol of their faith.

Even traditional prayers (such as Stations of the Cross, the “Litany of the Passion,” devotions to the Precious Blood or the Holy Face, and the Red Scapular) are all expressions of faith in the all-consuming power of love. And yet, despite its sacramental meaning, the cross of Jesus remains an instrument of death and destruction. Although it serves the dual purpose of being both a symbol of shame and a sign of victory, its origins and purpose remain: The cross on which Jesus died was a violent tool of execution. But, its power remains.

We celebrate this cross in our liturgies on Passion Sunday and Good Friday, in the Feast of the Exaltation of the Holy Cross on September 14, and in hymns such as “Lift High the Cross” and the chant Vexilla Regis Prodeunt.

In the life of the Church, the power of the cross is most especially celebrated in the sacrifice of the countless martyrs who have, often literally, carried their crosses in imitation of Jesus (cf. Mark 8:34-35).

On February 6, we celebrate the liturgical memorial of a group of 26 martyrs who gave their lives on a series of crosses set up on a hill outside the city of Nagasaki, Japan, on February 5, 1596. The first martyrs of the Church in Japan, this diverse group included Spanish, Mexican, and Indian religious, a number of Japanese lay catechists and interpreters, and three children, ages 9, 11, and 12 (who had served as altar boys for the missionaries). After enduring torture and physical mutilation, the martyrs were paraded through a number of villages before being tied to crosses and impaled with lances.

Read more:
A trick for making the saints come alive

Named for the Japanese Jesuit Paul Miki, these “Martyrs of Nagasaki,” were canonized in 1861. Since the time of their canonization, the Church has honored hundreds more Christians in Japan who died as martyrs, including the Filipino layman St. Lawrence Ruiz and his 15 companions, Blessed Charles Spinola and 204 companions, the Augustinian priests Blesseds Martín Lumbreras and Melchor Sánchez Pérez, as well as Blessed Peter Kibe Kasui and his 187 companions, and, most recently, the 17th-century samurai Blessed Justo Takayama.

An account of the experiences of these Japanese Christians is contained in Shusaku Endo’s evocative novel, Silence. In all, it is estimated that as many as 10,000 Christians lost their lives in religious persecutions in Japan between 1596 and the middle of the 19th century. Amazingly, once Japan was reopened to the outside world in 1865, thousands of Christians came out of hiding, asking the newly-arrived Westerners for statues of Jesus and Mary, remembering a smattering of Latin prayers and Portuguese phrases, and holding onto treasured relics of the missionaries their ancestors had known and loved.

When he announced the Great Jubilee of the Year 2000, in Incarnationis Mysterium, Pope Saint John Paul II urged the Church to remember the witness of those martyrs who had given all they had for the sake of Christ and the Gospel:

From the psychological point of view, martyrdom is the most eloquent proof of the truth of faith, for faith can give a human face even to the most violent of deaths and show its beauty even in the midst of the most atrocious persecutions.

May St. Paul Miki and the Martyrs of Nagasaki continue to guide and intercede for each of us, always reminding us that the sufferings and darkness we experience throughout our lives, in the wisdom of God, is not an end but, rather, a starting point for growing in the love and light of Christ.