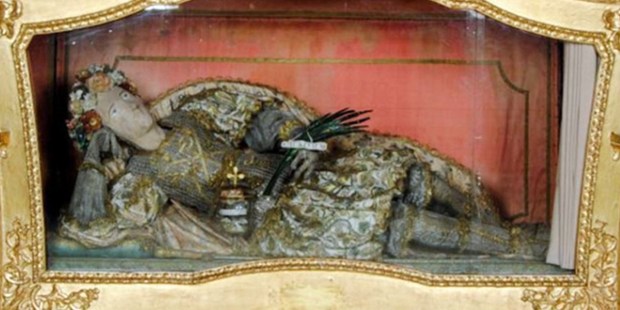 In 2012 the remains of St. Aurelius were discovered within what was thought to be a work of art.

Click here to launch the slideshow
When Joana Palmeirão set out to restore a sculpture of St. Aurelius that had been collecting dust in a storage room for hundreds of years, she was not expecting to discover that the elaborate artifact contained the actual remains of an early Christian saint. The story of of how the holy bones of a saint who died in Rome ended up in Portugal tells us not only about Early Christianity, but also about how the Catholic Church responded to the Protestant Reformation.

Europe is not short of wondrously preserved holy remains and the reliquaries that contain them. From the bejeweled relics of Germany to the spooky decorations of Rome’s Santa Maria della Concezione, adorned with the bones of 4,000 Capuchin friars, the continent is a treasure trove of ornately decorated holy bones.

But sometimes even the most elaborately decorated reliquaries need some restoration to revive their beauty. That’s what Joana Palmeirão accomplished as part of her research project in restoration at the Catholic University of Portugal. Together with the help of her supervisor, a trained archaeologist, Palmeirão began the restoration process on a reliquary of St. Aurelius, thought to be an early Roman martyr. A full-length, clothed and bejeweled effigy of Aurelius, along with that of a companion martyr named Pacificus, had been once been displayed in the Church of St. Michael the Archangel in Porto, Portugal. But for hundreds of years they had been locked away in a storage room. The diocese engaged Palmeirão and her supervisor to study, clean, and conserve the effigy of St. Aurelius so it could be placed on display again.

At first, the researchers believed that they were working on a sculpture. Layers of canvas and gold embroideries were in fact hiding the what appeared to be a “realistic” depiction of the anatomy of the saint. But Palmeirão’s supervisor soon realized the true nature of the restoration subject. It was neither a simple effigy nor an elaborate sculpture containing a tiny relic. Under the layers were the skeletal remains of St. Aurelius himself.

Out of the catacombs

How did Aurelius and Pacificus — about whom nothing much is known other than that they were buried with other Christian martyrs in Rome’s catacombs in the early centuries of Christianity — end up so richly robed in a storage room in Portugal?

As American photographer Paul Koudounaris explained in his 2013 book Heavenly Bodies: Cult Treasures and Spectacular Saints from the Catacombs (Thames and Hudson), Aurelis and Pacificus were among the “catacomb saints” — remains disinterred from the Roman catacombs and sent to the churches of Europe in the 18th century, to bolster Catholic devotion to the the saints in the wake of the Protestant Reformers’ destruction of relics and statues. When Aurelius and Pacificus arrived in Porto, they received a rich welcome. As Koudounaris notes, believers would decorate the holy bones of the catacomb saints with gold and other precious materials. The remains of Aurelius and Pacificus were both wrapped in painted canvas and decorated with geometric and vegetable motifs and metallic embroideries that resulted in a glittering effect.

By the middle of the 19th century, however, the two saints’ effigies were placed in storage, as elaborate reliquaries had fallen out of fashion. For some reason they were forgotten and stayed hidden away for nearly 200 years. Many other “catacomb saints” were destroyed, perhaps by those unaware of their status as relics.

Once the true nature of St. Aurelius’ reliquary was unveiled, Palmeirão proceeded with the restoration. The effigy was x-rayed and his remains examined. It turned out that some bones were missing, but overall the x-rays showed evidence of a well-preserved skeleton. Next, the restorers tackled the 400-year-old decorations. Judging from an Italian inscription inside one of the finely embroidered sandals, it seems that part of the ornaments were assembled in Italy before the body was sent to Porto.

Thanks to Palmeirão and her team, which included other students from the University, St. Aurelius’ effigy was restored to his former glory. Now, the restoration team hopes to look for other cases where “catacomb saints” were forgotten or mistaken for decorative artifacts, in order to bring them back to light.