Why is there a devil hiding in a cloud in this medieval fresco? 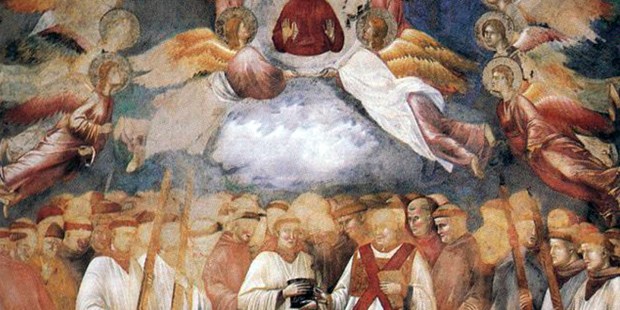 Art historian Chiara Frugoni has spent more than 30 years studying the famous St. Francis cycle, the work of the famous 13th-century Florentine artist, Giotto di Bondone and his teacher, Cimabue. The cycle, which depicts the life and deeds of the beloved Umbrian saint and consists of a series of frescoes in the upper level of the Assisi Basilica, was being restored after incurring heavy damage from an earthquake back in 1997. In the fresco depicting the death of the saint, Frugoni made a discovery that confirms the devil is, indeed, in the details.

Read more:
The Legend of St. Francis: The work of Giotto or Cimabue?

Giotto included the profile of a smirking devil in a cloud, hiding in plain sight. “It is very visible,, Frugoni said in a telephone interview with the Associated Press back in 2011. No one noticed it any earlier, she argues, simply because no one was looking for it. “One sees what one already knows. I assure you that now all will see it”.

Sure, there is indeed a devil there. But why?

A possible explanation was provided by Fr. Enzo Fortunato, a Franciscan priest. In an article shared by CBS, he explains some medieval traditions might be at play here. In medieval times, Fortunato argues, it was commonly believed that at the moment of death two key characters would jump into action: one’s guardian angel, accompanying one’s soul to heaven (if that is where one is headed, that is); and a devil, in charge of accusing the deceased to get a chance to drag him into hell. But this is only one possible explanation for the inclusion of this demonic figure in the scene, and the significance of its placement, in a cloud, is still to be studied.