‘They Shall Not Grow Old,’ a time machine back to the horrors of WWI 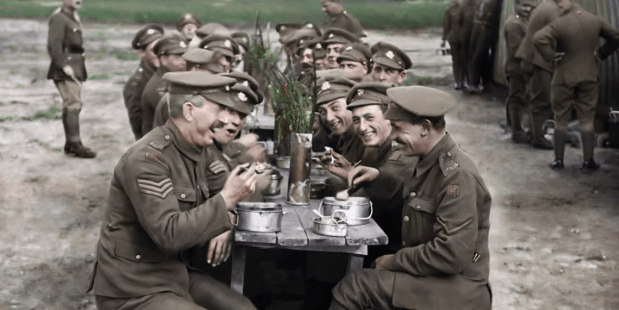 As the grainy, herky-jerky historical images begin their transformation, it is akin to being physically transported back in time to join these men in the mud.

There is an astonishing, gasp-inducing moment about 10 minutes into director Peter Jackson’s new documentary, They Shall Not Grow Old, one made all the more remarkable because viewers know ahead of time that it is coming. It happens because, even forewarned, one isn’t quite prepared for the startling reveal of what Jackson and his team have accomplished with this film.

In 2015, Jackson was approached by Britain’s Imperial War Museums to create a special project for the 100th anniversary of the end of the Great War. To this end, the museum provided the director with over 100 hours of wartime film footage and approximately 200 audio interviews with British veterans who had served on the frontlines. Once so equipped, Jackson was then instructed to do whatever he wanted to with it all. As you might imagine, the man renowned for his groundbreaking Lord of the Rings trilogy had a few ideas.

The first is that the film would feature no narration other than the voices of the soldiers themselves. The movie would be told entirely from the perspective of the men who served and their perceptions of what they experienced. As such, there are no captions to provide context, such as what year it is or what location various scenes are taking place in.

To this effect, rather than commencing with the standard lecture on the political motivations that brought about World War I, the film instead opens with a veteran relating a simple anecdote. He tells how his college rugby team was in the midst of a match against visiting Germans when the news hit that war had been declared. Upon hearing this, the men on both sides decided to finish their game, then shook hands and went home to prepare to meet each other on the battlefield. It’s an almost lighthearted beginning, but it does capture the businesslike attitude with which so many of the Brits approached the endeavor.

And then the film reaches the trenches, and everything changes. It has been well publicized what Jackson’s production company has done with the footage they were provided. Using state-of-the-art technology, they have cleaned up the aging reels frame by frame, added color and sound, and converted the results into 3-D. Even possessing this information beforehand, though, does not prepare the viewer for the moment of transition. As the grainy, herky-jerky historical images begin their transformation, it is akin to being physically transported back in time to join these men in the mud.

This is not to say what is seen on the screen is 100 percent realistic. If anything, it is actually a sort of hyperrealism. But that is appropriate in its own way for, as the interviewees continue their stories, it becomes evident they are themselves becoming detached from the normal world. The trenches become their universe, their reality, and it is one barely recognizable to our own.

Lamenting the burgeoning war, Pope Benedict XV wrote in his 1914 encyclical Ad Beatissimi Apostolorum, “There is no limit to the measure of ruin and of slaughter; day by day the earth is drenched with newly shed blood and is covered with the bodies of the wounded and of the slain.” But it is one thing to read about such horrors; it is another thing entirely to see and hear in vivid color the reality of men standing ankle deep in muddy water, eating soup from moldy tins, while mere yards away in No Mans Land thousands of irretrievable dead bodies lie decomposing in the sun. Such sights will linger long after the movie has ended.

That is where the film’s strength lies. Because of the way it’s presented, this is not an educational film in the traditional sense. If one wants to know the who, what, when and where of World War I, they would be better suited spending time with something like the BBC’s docuseries The First World War, now streaming on Amazon Prime, or the excellent The Great War channel on YouTube. But if you want to see, hear, and almost feel what it was like for the men who were asked to leave everything behind and go fight, well, it’s not going to get much better than They Shall Not Grow Old. At least, not until they invent actual time travel, anyway.