St. Govan’s Chapel is named after a cave-dwelling monk who lived there in the 6th century.

Built into a crevice in the cliffs on the rocky coast of Wales stands St. Govan’s Chapel, which dates from the 13th century, but may have been built on the spot where St. Govan, a 6h-century hermit, sought refuge from the world.

The chapel, measuring 20 by 12 feet, is constructed of limestone, the same material that makes up the cliffs that surround it. Behind the altar is a small room where, legend has it, the saint spent the last days of his life. 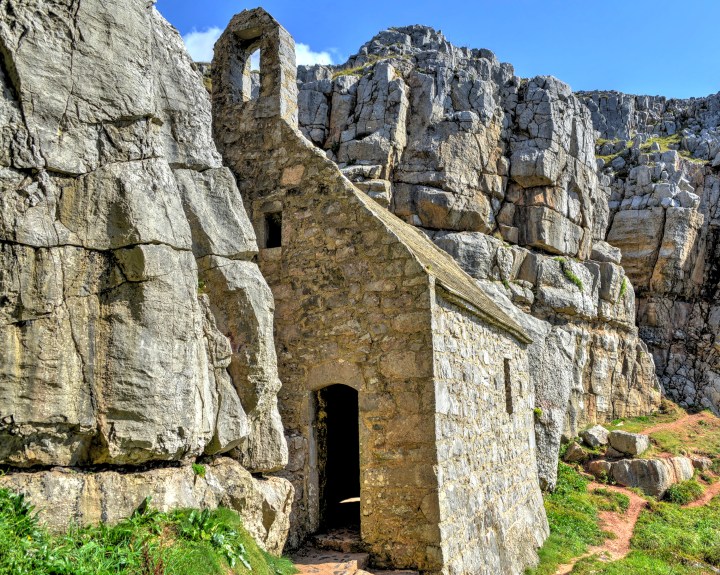 Not much is known for certain about who St. Govan was. One popular theory identifies him as a disciple of St. Ailbhe, a missionary in Ireland, who himself was a disciple of St. Patrick. It is said that as an old man Govan traveled to Wales to end his life as a hermit.

According to the blog Welldigger, as a disciple of St. Ailbhe Govan would have been taught to imitate the Desert Fathers, mentioned in Hebrews 11:37-8:

They went about in sheepskins and goatskins, destitute, persecuted and mistreated — the world was not worthy of them. They wandered in deserts and mountains, living in caves and in holes in the ground.

Tradition tells us that Govan, in search of a cave to hide in, made his home in the spot by the cliffs, which was located by a natural spring. A well, which has since dried out, was listed among the Holy Wells of Wales by Francis Jones.

Until late in the 19th century, pilgrims traveled to St. Govan’s well to imbibe of its healing powers. It was not unusual to see a pile of crutches left behind beside the well or behind the chapel’s altar, reports Welldigger.

“On the cliff side by St. Govan’s Chapel, Bosherston parish: especially famous in the cure of failing eyesight, lameness, and rheumatism. … Near the well is a deposit of red clay formed by rock decomposition, and great virtue was attached to it: a poultice of this was applied to limbs and eyes, and the patients then lay there for several hours in the sun.”

A carving of a fish, an ancient symbol of Christianity, can be seen on the outside of the door, and is thought to have been made many centuries ago. The chapel is now maintained by the Pembrokeshire Coast National Park Authority, but the faithful continue to come. Flowers are often found on the altar, which was built over the spot where St. Govan himself is said to lie.