This heroine of Ecuador lived on nothing but the Eucharist 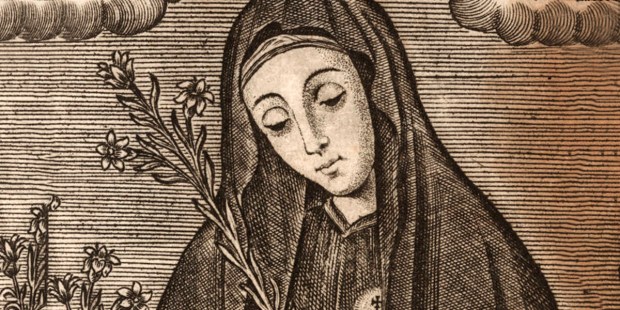 Often compared to Rose of Lima, she lived her piety and mortification from home.

On October 31, 1618, a baby girl was born in the city of Quito, which was located in the New Kingdom of Grenada. Today this area is known as Ecuador. The child’s father was an upstanding and respected Spanish nobleman from Toledo by the name of Don Girolamo Flores de Paredes. Her mother’s name was Doña Mariana Cranobles de Xaramilo and she was descended from the most highly respected of Spanish families. Girolamo and Mariana named their daughter after her mother, Mariana. She was the youngest of eight children.

Mariana was orphaned at the age of seven, and her upbringing was taken over by her older sister, Jeronima, who had already married. Mariana had an obvious sense of piety and humility that seemed part of her persona, and her sister and her brother-in-law, Cosme de Caso, decided they would respect her wish to live in seclusion in their house. Mariana did not live in total isolation because there was a Jesuit church nearby and she spent as much time there as she could praying before the Blessed Sacrament.

Mariana instinctively began to develop a deep sense of piety and self-mortification, denying herself food, drink, and sleep. Her brother-in-law had the Jesuit priest, Juan Camacho, guide her in her development.

Like St. Rose of Lima (to whom she is often compared), she did not enter a convent but rather stayed in her home devoting herself to prayer and mortification and fasting.

It is reported that Mariana’s fasting was so intense and strict that she ate only an ounce of food every eight to 10 days. This is impossible for a person to survive on, but similar to the amounts cited in the lives of St. Catherine of Siena and St. Rose of Lima.

Mariana’s life was miraculously sustained by the Holy Eucharist. Many witnesses gave testimony to the fact that Mariana did receive Holy Communion each morning. She was determined to follow the mandate of Jesus: Who wants to follow me should deny herself.

Read more:
Another holy woman who lived on only the Eucharist: Maria Domenica Lazzeri

Mariana’s spirituality and the gifts attached to it included her being able to predict the future, see future events as if they were passing before her, look into the very hearts of people, and intercede with God to heal diseases by making the Sign of the Cross or sprinkling sick people with holy water. It was documented that her prayers even restored a dead person to life. The reputation of the holy woman called Mariana spread far and wide.

In 1645 there was a great earthquake in Quito, making an already-grave situation of disease in the city even worse. A Jesuit priest gave a homily in church and prayed aloud, “My God, I offer you my life so that the earthquakes are over.”

But Mariana quickly came forward and exclaimed, “No Lord, the life of this priest is necessary to save many souls, but I am not necessary … I offer you my life to stop these earthquakes.”

It is reported that on the day she died her sanctity took a visible form: A pure white lily sprouted from her blood, blossomed, and bloomed for all to see. Because of this she became known as the Lily of Quito. In 1946 the Republic of Ecuador gave her the title Heroine of the Nation.

St. Mariana de Jesus de Paredes was beatified by Pope Pius IX on November 20, 1853, and canonized by Pope Pius XII on June 4, 1950. She is the patroness of those with bodily ills, people rejected by religious orders, and those who lose their parents, especially while children.