What does the expression “fishers of men” mean? 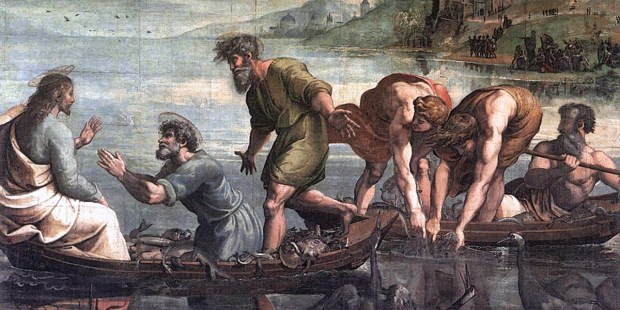 The original Greek phrasing has little to do with “catching” people.

The call of the first disciples of Jesus is surely a key passage in the gospels. The scene is told in the three synoptic gospels (that is, Matthew, Mark, and Luke) in almost the same manner (although Luke includes it in the first miraculous drought of fishes). It is in the Gospel of Mark, however, where this calling and the beginning of Jesus’ public ministry appear as inseparable, as professor Eugene LaVerdiere explains in his introduction to the Gospel according to Mark, thus highlighting its ecclesiological dimension.

As Jesus was walking beside the Sea of Galilee, he saw two brothers, Simon called Peter and his brother Andrew. They were casting a net into the lake, for they were fishermen. “Come, follow me,” Jesus said, “and I will make you fishers of men.” At once they left their nets and followed him.

What does this “fishers of men” mean? In the Greek original text, one reads halieis anthropos (ἁλιεῖς ἄνθρωπος). Whereas we might all be a bit more familiar with the meaning of the word anthropos (Greek for “men”), halieis is more complicated to translate. Halieis applies not only to fishermen, but to all those who work at sea. It implies fishing — but also sailing, boating, roaming, and the like. In sum, it implies a set of skills that do not refer only to catching fish.

Read more:
The reason John the Baptist has wings in Orthodox icons

Some biblical scholars claim Jesus was referring to a passage found in chapter 16 of the Book of Jeremiah, which refers to the restoration of Israel. The passage reads as follows:

If scholars are right when pointing out Jesus used the phrase “fishers of men” as evoking Jeremiah, then in doing so he was telling Andrew and Peter that he was indeed the Messiah, and that they were to participate, following his lead, in his own salvific mission. That is, that Jesus was not simply trying to connect with Andrew and Peter, using words that matched their occupation. By using the prophet’s expression, Jesus was presenting himself as the one who would restore Israel (as the text from Jeremiah explains) while also describing the apostles’ own calling: that of co-participating in the history of salvation. These halieis would then not only “catch” men, but would take them to a safe harbor in the bark of St. Peter, as the Church has been referred to since its early days.