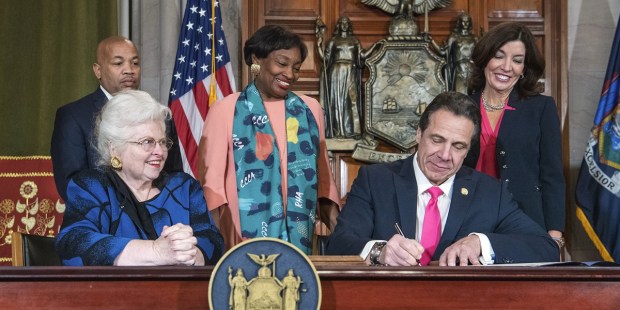 The alleged murderer will be prosecuted for his former girlfriend’s death, but not for the death of her unborn child.

The boyfriend of Jennifer Irigoyen, the pregnant woman who was pulled from her Queens apartment and savagely stabbed to death last week, reportedly surrendered to the 104th Precinct and was arraigned on Friday.

The charges initially included second-degree murder, tampering with physical evidence, fourth-degree criminal possession of a weapon and second-degree abortion. The last of these was dropped since Governor Andrew Cuomo’s new abortion law removed the crime from the state’s penal code.

Witnesses saw the Irigoyen, 35, who was 14 weeks pregnant, dragged from her apartment around 1 a.m., calling out to anyone who might hear her, “He’s got a knife! He’s going to kill the baby!” In fear for her own life and that of her unborn child, witness Maurice Zereoue told The Post, she fought the whole time. “I seen her hands hanging on to a hallway wall for dear life”, Zereoue said.

Irigoyen was then stabbed multiple times in the torso, abdomen, and neck before being left to bleed out on the floor of the building’s entrance. First responders rushed Irigoyen to the hospital, but neither she nor her baby could be saved.

Jennifer was a real estate agent and dance instructor, who was well liked by the people of her building. She leaves behind a young child from a previous relationship.

Her relatives shared their grief on a GoFundMe, set up to provide for her surviving child’s future:

The courts have begun the process of finding justice for Jennifer, however, her unborn child was not afforded the same courtesy, as the District Attorney dropped the abortion charge. The DA commented that the abortion charge, “was repealed by the Legislature, and this is the law as it exists today.”