Love at first sight: The sweet story of how Sts. Louis and Zelie Martin fell in love 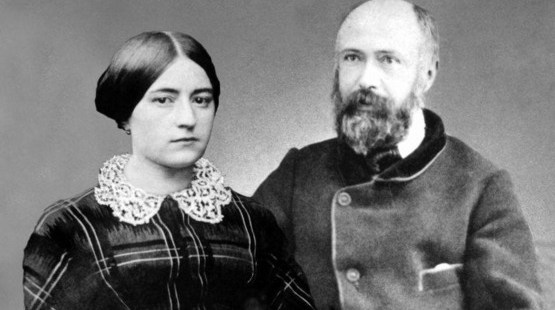 The saintly couple’s love story is as romantic as it is providential.

Sts. Louis and Zelie Martin, the first married couple to be canonized together, were not initially drawn to married life. In fact, marriage was the farthest idea from their minds.

As the years passed by, Louis and Zelie began to have a feeling they were called to the married life. However, no eligible suitor arrived for either.

Then one day changed their lives forever.

As Zelie was walking down a small, narrow medieval bridge in her hometown of Alençon, she noticed a tall handsome young man walking toward her. Zelie had never seen him before and she couldn’t help but smile. Then as they were about to brush by each other, Zelie heard within her soul, “This is he whom I have prepared for you.”

Louis similarly was struck by this beautiful young woman. One can imagine the two lovestruck souls looking back at each other as they kept walking forward to opposite ends of the bridge.

Providentially, Louis’ mother had been taking some lace classes with Zelie and had already wanted to play matchmaker, and set up her son with the young woman.

When the two met, they immediately knew that God had set them on a path to be united in the sacrament of Matrimony.

They didn’t waste any time and after just three (long and painful!) months of engagement, the two were united in marriage on July 13, 1858. Zelie was 27 years old and Louis 35 when they were married.

This was just the beginning of a beautiful marriage that bore many children, including the famous St. Therese of Lisieux and Servant of God Leonie Martin.

While certainly not every marriage begins this way, it reminds us that God is a romantic at heart, always ready to surprise us with his plan for our lives.