How did Joseph and Mary meet before getting married? 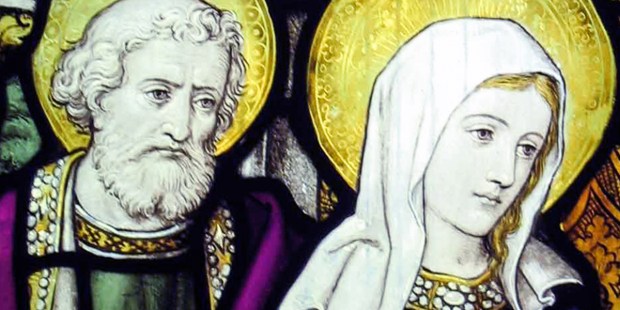 Did they fall in love?

Marriage in the ancient world was quite different from what it is today. Couples typically did not get the privilege to choose their future spouse, and Jewish culture was no exception.

In the Jewish tradition, a matchmaker helped to suggest a spouse for a young woman at the age to be married. God was ultimately given the final choice, through prayer, but rarely was the decision left to the young couple.

It was likely that a similar situation occurred with St. Joseph and the Virgin Mary.

Various traditions hold that Joseph was an older widow, while other traditions claim he was a strapping young man. In either case, there exists one narrative from the Protoevangelium of James (an early non-canonical “gospel” that preserved some oral tradition) that offers an explanation of how the two met.

It is held that the Virgin Mary was entrusted to the Temple at an early age and when she reached puberty, a proper husband was sought.

And the high priest went in, taking the robe with the twelve bells into the holy of holies; and he prayed concerning her. And behold an angel of the Lord stood by him, saying unto him: Zacharias, Zacharias, go out and assemble the widowers of the people, and let them bring each his rod; and to whomsoever the Lord shall show a sign, his wife shall she be. And the heralds went out through all the circuit of Judæa, and the trumpet of the Lord sounded, and all ran.

And Joseph, throwing away his axe, went out to meet them; and when they had assembled, they went away to the high priest, taking with them their rods. And he, taking the rods of all of them, entered into the temple, and prayed; and having ended his prayer, he took the rods and came out, and gave them to them: but there was no sign in them, and Joseph took his rod last; and, behold, a dove came out of the rod, and flew upon Joseph’s head. And the priest said to Joseph, You have been chosen by lot to take into your keeping the virgin of the Lord…Joseph said to Mary: Behold, I have received you from the temple of the Lord; and now I leave you in my house, and go away to build my buildings, and I shall come to you. The Lord will protect you.

Other stories are similar in style, though substituting the older Joseph for a younger one.

Whatever the case may be, it is affirmed that God chose Joseph as the husband of Mary, knowing he was a “just man,” worthy to protect the new “ark of the covenant” who would bear the savior of the world.

While it may not have been a romantic meeting according to our modern sensibilities, their meeting was providential, and they grew in their love of each other, providing a beautiful home for the child Jesus to grow up in.

Read more:
How old was St. Joseph when Jesus was born?