Exclusive photos: The hope of the world

“May the newly-established tabernacle be an inexhaustible source of grace for the city of Philadelphia, the great Archdiocese, and the whole world. I hope the good Sisters will never lack zeal and devotion and give much joy to you.” — Mother Mary Michael to Archbishop Edmond Prendergast, July 2, 1915.

To enter through the doors of the aptly named Chapel of Divine Love in Philadelphia’s Fairmount section is to step out of the world and into the embrace of what can only be described as a community of divine love.

Bells can be heard in the distance as the gigantic digital clock beside the altar strikes 4 p.m. A door creaks open and light spills into the dimly lit chapel. A nun in her distinctive pink habit enters the sanctuary, silently making her way to the kneeler in front of the Blessed Sacrament. As she approaches, another nun who is at the kneeler rises. The two stand side by side for a moment and then reverently bow, and the change of station takes place: a routine that’s been repeated every 30 minutes for over a century.

For 24 hours a day, seven days per week, for 104 years, the Holy Spirit Adoration Sisters have been present in adoration before the Blessed Sacrament, laying before Christ the prayers of a world so desperately in need of His mercy and grace. 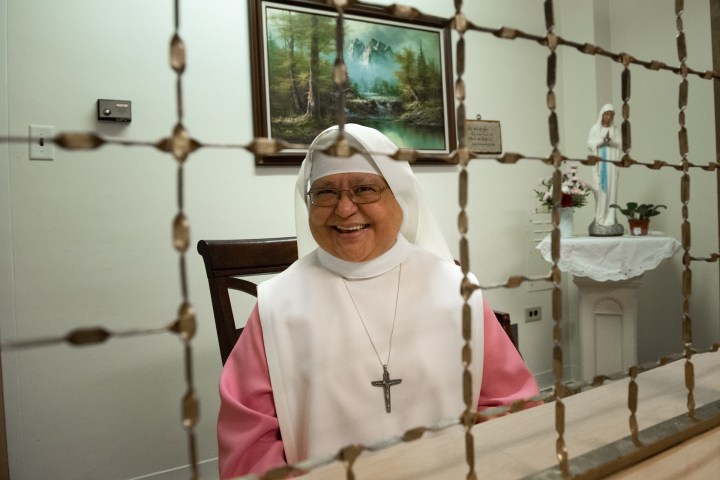 Mother Mary Cecilia, former Superior General of the Congregation, states that since their humble beginnings back in the early 1900s, the Congregation has opened 22 convents on four continents and has over 300 Sisters worldwide, all devoted to this incredible mission of “Perpetual Adoration at the service of the Church and the sanctification of the Priesthood.”

As the world endured war, the Great Depression, and the rise and fall of communism, the Sisters have persevered in their call to holiness, bringing hope to a fallen world with lives of joyful sacrifice and heroic devotion centered on Christ.

For all the challenges that face the Church and the world today, there is hope. But this hope does not rest in the hands of the world’s leaders, its technology or its novel ideas.

This hope flows through these Sisters who devote their lives to humble adoration, and through others like them who persevere in prayer amid the struggles of life.

And in the words of the priest who compassionately extends God’s mercy to those seeking forgiveness.

It’s in the arms of an embrace comforting the brokenhearted …

And in the courage of those who defend those whose lives are most vulnerable.

Hope is in every action that cooperates with grace and seeks to bring Christ to those in need …because it is He who is the hope of the world.

Click HERE to learn more about the Sisters and information on visiting the Chapel.