This Sunday’s Mass has the secret to successful living 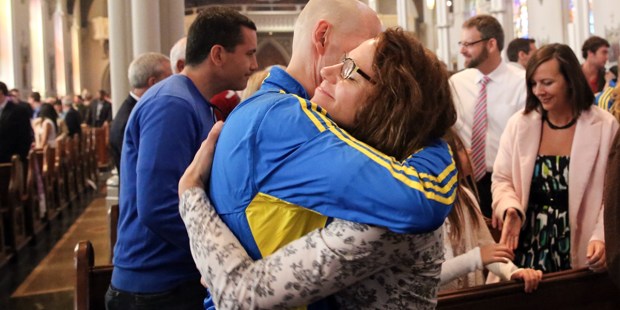 From Dale Carnegie to Mother Teresa, some top-notch influencers have lived this recipe.

Jesus Christ gives the secret to successful living this Sunday (the Seventh Sunday of Ordinary Time, Year C): Love like a loser.

“Love your enemies, do good to those who hate you, bless those who curse you, pray for those who mistreat you,” he says, “and lend expecting nothing back.”

That certainly sounds like a recipe for certain failure. But it’s not.

Every successful person has followed that advice to one degree or another, from Dale Carnegie to Mother Teresa.

Carnegie’s wildly successful How to Win Friends and Influence People was one of the most influential books in American history and is still echoed in business books decades later. His advice? Be genuinely interested in other people, smile, remember others’ names, encourage them to talk about themselves, share their interests, and make them feel important.

Mother Teresa could easily look like a Carnegie follower. People who spoke to her would say things like “It was like no one but me existed when we spoke,” “I felt like she knew me and loved me.” She even forbade her nuns to preach to those in their care. They were to love them, not argue with them — and their love converted more people than arguments ever could.

We can be as successful as both — not by pretending to love people, but by actually loving them.

Think of how freeing Jesus Christ’s advice is in every aspect of your life.

Maybe it happens when you’re driving and someone cuts you off. “How dare they!” you think, and look for a way to get back at them.

But Jesus says: “To the person who strikes you on one cheek, offer the other one as well.” If you pray for the driver, see your own faults mirrored in their hastiness, and express gratitude for the opportunity to help them, your whole mood — and your physical safety — will vastly improve.

Or maybe it’s money that does it. If I feel overcharged or underpaid, the anger burns deep, and eats away at me. I fantasize about getting even.

But Jesus says: “From the person who takes your cloak, do not withhold even your tunic.” If I love them and, in my heart, give them the money they took, I’m much happier.

Or think about arguments at home. We can’t stand losing even petty disagreements — we know that giving up power in small things could mean losing big later on.

But a wise priest once said, “The spouse who loves the most loses the most arguments.”

That’s because the one who loves seeks unity, and is quicker to forgive. Mercy, in turn, brings happiness and release — even the hardest kind of mercy, forgiving those who aren’t sorry.

To love the way Jesus asks, we need diet and exercise — for our ego and our heart.

All of Jesus’ advice today comes down to “do to others what you would have them do to you.”

We want others to back off instead of escalating, overlook our faults instead of pouncing, and forgive instead of fighting.

But we do not naturally do any of that. Our instincts are for self-preservation, not generosity.

St. Paul this Sunday explains why: We are like the first man, Adam, not the new man, Christ. “The first man was from the earth, earthly; the second man, from heaven,” he writes. “Just as we have borne the image of the earthly one, we shall also bear the image of the heavenly one.”

Becoming new is a difficult process of denying our ego the petty little victories it demands and doing painful exercises that stretch our heart to loving others and serving them, no matter what — all of it in daily dialogue with Christ.

In Sunday’s first reading, David had the opportunity to kill his enemy in the dead of night, but refused — and we still talk about it 3,000 years later. The crucifix in every church shows how Christ’s love of enemy is also still fresh in our minds, 2,000 years later.

In our own day, after Coptic Christians were beheaded in a grisly 2015 video, their families showed reporters what Christianity looks like.

“May God forgive the killers. We don’t have hatred towards them — this is Christianity,” said the 14-year-old daughter of one victim. “God forgives the sinners. So shall we.”

“I congratulate ISIS. God is using them to bring martyrs to the world,” said the local bishop, who is related to several victims. “I was very sad when I heard the news of the air strikes lead by the Egyptian military against ISIS. God asks us to even love our enemies.”

We are each capable of that kind of love. Not only that, Jesus demands it. Starting today.