A group of Christians recently announced the ambitious plan to resurrect Bassac Abbey in southwestern France.

“We have chosen to make Bassac Abbey the first model of the non-profit initiative we are launching for a West that takes its destiny into its own hands, inspired by values based on Christianity at the service of the greatness of man, the dignity of the person, and the defense of the individual with freedom of conscience. The abbey of Bassac brings together all the qualities required to be the venue for a Christian project intended to welcome, enlighten and inspire our society,” reads a document signed by Hervé Gosselin, Bishop of Angoulême, Father Jean-Louis Souletie, Dean of the Faculty of Theology of the Catholic Institute of Paris, and Pierre Deschamps and François Hériard-Dubreuil, co-founders of the Bassac Abbey Foundation, published on January 28 in the Figarovox.

What can the millennial Abbey of Bassac teach people of the 21st century? What social, environmental, cultural and especially spiritual contributions can it still make to our time? These are the questions that the project entitled “Bassac 2nd Millennium” (“Bassac 2e Millénaire”) attempts to answer. For a thousand years, abbeys have been places of peace and healing, places where the Truth is sought in silence. Aware of this patrimonial, social and spiritual wealth, this group—formed of Catholics and Christians of other denominations—has embarked on the formidable project of restoring the abbey of Bassac to its mission of yesteryear. The abbey fell into disuse following the departure of the Missionary Brothers of St. Teresa in 2012, but the monks placed the condition that in the future the abbey pursue its spiritual mission, and not transform itself into a luxury hotel or anything of the sort.

Seven years ago, the diocese of Angoulême, under the leadership of Bishop Gosselin, committed to maintaining the original mission of the abbey with the help of several partners: the Missionary Brothers, friends of the abbey, and also François Hériard-Dubreuil, president of the business group Rémy-Cointreau (producers of cognac, liqueurs and spirits), and Pierre Deschamps, president of Christian Entrepreneurs and Leaders (EDC, for its initials in French) from 2006 to 2011. The project immediately attracted these latter two Christian leaders. “I come to the abbey of Bassac to find time for interiority. It represents the type of place that our society needs. Our idea is that Bassac Abbey become ‘the House of Time’: a vision of the future that is the fruit of a long collective discernment,” said François Hériard-Dubreuil.

In an interview with Aleteia, Pierre Deschamps also stressed the importance of saving these abbeys from ruin or abusive transformations by real estate developers. “It’s estimated that about 200 abbeys will see their religious community disappear in the coming years. So, what are we going to do with these millenary abbeys? Instead of imagining the worst scenarios, Christians and others must invest. When I was asked to act for Bassac Abbey, I immediately agreed. I wasn’t familiar with the place, but discovering it reinforced my decision to commit to saving it.”

The birth of “Bassac 2nd Millennium”

While the first seven years of the project were used to lay the foundations — study and quantification of architectural and environmental renovation, reflection on artistic and cultural programming, adoption of the principles of quality hospitality — the group of enthusiasts officially announced the launch of the project in 2016 with the creation of a Foundation aiming to raise the necessary funds. Through donations and sponsorship, the Foundation hopes to raise a total of 12 million euros. Assisted by the Heritage Foundation, the renovation will take several years. The first stage? The restoration of the architectural heritage, the cost of which amounts to 3.9 million euros. For this, the Foundation has called on the Parisian architectural firm Le Moal, which specializes in the renovation of convent buildings and which has worked on the restoration of Saint-Martin de Mondaye Abbey.

The cultural and architectural heritage part of the project is obvious, but “Bassac 2nd Millennium” is also distinguished by its strong spiritual component. Yet, how is it possible to maintain the spiritual mission of the place if there is no more religious community living there? “Bishop Gosselin has appointed a lay couple — members of the association of friends of the abbey, Christine and Emmanuel Troucelier — to be responsible for spiritual activities,” said Pierre Deschamps. “It’s up to them to form a team that will reflect on the content and programing of the activities of the abbey’s spiritual activities, always related to the theme of Time and without the spiritual and cultural dimensions being dissociated from each other,” said the bishop of Angouleme at the launching of the Foundation in 2016. Courses and spiritual retreats, prayer times, conferences … The public will be presented with many spiritual offerings that will allow them to cut themselves off from the world for a few moments.

Do abbeys still have something to offer men of the 21st century? “Yes, I am sure,” said Pierre Deschamps. “At the official public launch of ‘Bassac 2nd Millennium’ on January 29, the sociologist and author of the book The Time of the Monks, Danièle Hervieu-Léger, said, ‘The abbeys are empty of their monks but are filled with people who want to come to these places.’ This sentence highlights the popular interest. It’s not only focused on abbeys, but on all places of spiritual life. Our contemporaries, Christians or not, are seeking these places of calm, peace, and silence where they can retreat. The abbeys are the most striking examples.”

The most beautiful abbeys of France in pictures: 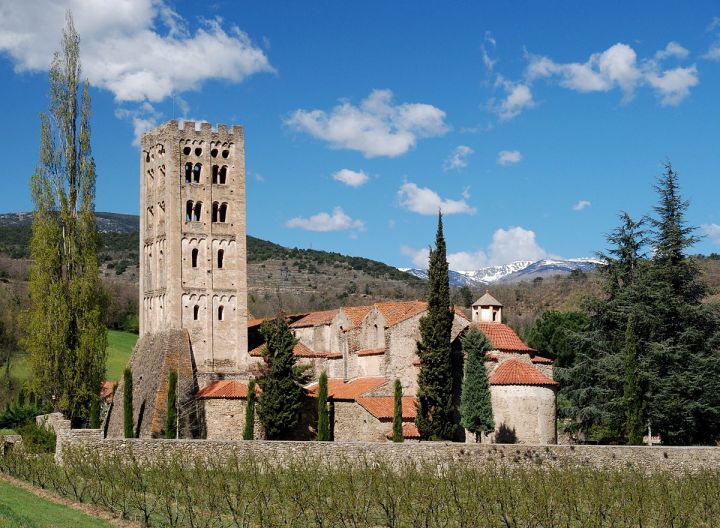