If Sodom really existed, where is it? 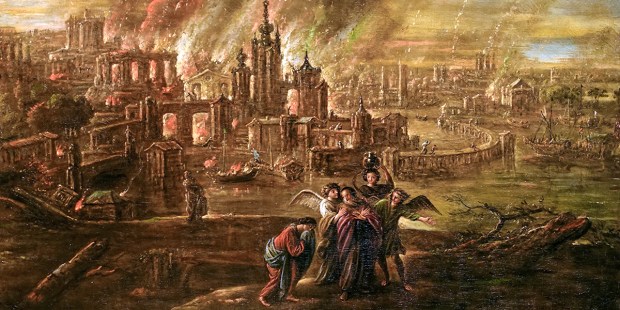 One American archaeologist thinks he knows.

In the Gospel according to St. Luke, Jesus says that when Lot left the city of Sodom, “fire and sulfur rained from heaven and destroyed them all.” Apparently, the town was so completely destroyed that archaeologists have never been able to find it.

Does that mean that the account of Sodom and Gomorrah in the Book of Genesis is merely mythical? Not necessarily.

Archaeologist Steven Collins, of Trinity Southwest University, New Mexico, has been excavating the site of Tall el-Hammam in Jordan since 2005, and says that when comparing the site with the remains of other nearby ancient cities, it is the best candidate for the lost city of Sodom.

The Biblical Archaeology Review explains that Tall el-Hammam is located in modern Jordan at the eastern edge of the kikkar, a large oval fertile plain just north of the Dead Sea mentioned in Genesis 13. It was destroyed by fire at the end of the Middle Bronze Age and remained uninhabited for centuries, the Review says:

Across Tall el-Hammam, archaeologists found widespread evidence of an intense conflagration that left the Middle Bronze Age city in ruins. They found scorched foundations and floors buried under nearly 3 feet of dark grey ash, as well as dozens of pottery sherds covered with a frothy, “melted” surface; the glassy appearance indicates that they were briefly exposed to temperatures well in excess of 2,000 degrees Fahrenheit, the approximate heat of volcanic magma. Such evidence suggests the city and its environs were catastrophically destroyed in a sudden and extreme conflagration.

The excavation Collins is leading is a joint scientific undertaking between Trinity Southwest University and the Department of Antiquities of the Hashemite Kingdom of Jordan. Tall el-Hammam was strategically located along water sources and trade routes, suggesting that it was a central hub during its time, according to Popular Archaeology. What has been learned so far includes:

There was both a lower and an upper city, all surrounded by a 5.2-meter-thick wall as tall as 10 meters.

In the upper city, there are remains of a mudbrick palatial structure called the “red palace” because of the color of the mudbricks, reddened due to a conflagration.

The city’s heyday seems to have come to a sudden, inexplicable end toward the end of the Middle Bronze Age, and the city was left a wasteland for 700 years.

Can it ever be proven that Tall el-Hammam was biblical Sodom? Collins says it might take a while. In an earlier article, in 2014, Collins said that his team had opened up about a hundred excavation “squares” of 6 meters by 6 meters.