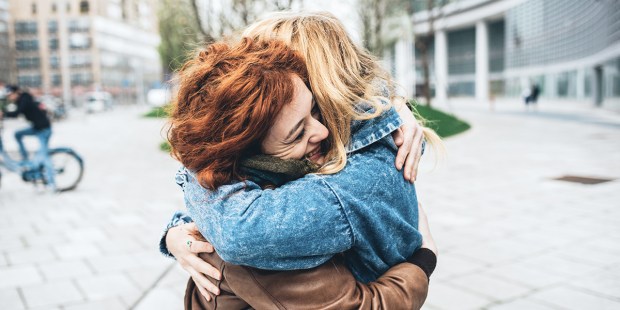 Being hugged at some point in the day prevents our good mood from completely disappearing.

Have you had a hug lately? If not, turn to a friend or family member and give them an embrace because science continues to reveal that hugging is very good for us.

A new study from Carnegie Mellon University found that hugs protect us from the effects of a bad mood after an argument or conflicts, and can actually lead to better health and relationships all around.

For this study, the authors analyzed data of 404 men and women ages  21 to 55, all in generally good health, from the Pittsburgh area. Only a quarter of the individuals were either married or in marital-like relationships. They were interviewed every night for two weeks about their interactions with others each day. They described social activities, conflicts, resolutions, and of course, hugs. Individuals were also asked about their mood and any changes throughout the day. Previous research has shown the benefits of hugs, but were focused on romantic relationships. This new work looked at the power of hugging among various social circles.

The researchers found that people who received a hug on the same day as experiencing a conflict with another person showed a smaller decrease in positive emotions and a smaller increase in negative emotions compared with individuals who were not hugged. So, being hugged at some point in the day seems to shield one’s good mood from diminishing completely, and similarly, prevented them becoming more upset. Hugs were shown to help reduce bad moods in participants through the following day, as well.

The authors point to several limitations from the study in drawing the connections. For example, participants weren’t asked who they received their hugs from, or whether or not the hug was received before or after a conflict, which could perhaps play a role in the effectiveness of the hug. From the researchers:

“This research is in its early stages. We still have questions about when, how, and for whom hugs are most helpful,” says Michael Murphy, one of the study’s co-authors. “However, our study suggests that consensual hugs might be useful for showing support to somebody enduring relationship conflict.”

Murphy and his co-authors hope that future research will better clarify how, why, and even when hugging is so effective. They believe their results show the potential influence of a hug on difficult days: “[H]ugs may be a simple yet effective method of providing support to both men and women experiencing interpersonal distress,” they conclude.

Read more:
Your kids really do need all those hugs