Meet a “Cinderella saint,” a powerful intercessor for abused children 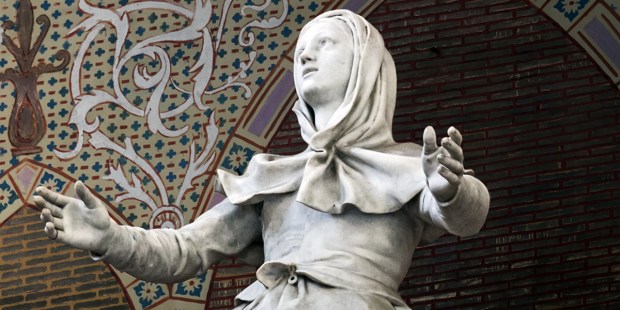 Though an evil stepmother made her life unbearable, God showered her with grace.

Sickly and deformed and abused by her stepmother, she could be called the “Cinderella saint.” Her name was Germaine Cousin, a child of 16th-century France.

Born with a right arm that was deformed and partially paralyzed, Germaine had a disease called scrofula, which caused terrible, ugly abscesses across her neck. Worst of all, she was abused by her step-mother for her entire life. And despite deformity, illness, and incredible abuse, she managed to become a beloved saint.

Germaine Cousin was born in 1579 near Toulouse in France. When she was only four years old, the plague took her caring mother. Her father, Laurent Cousin, married a woman named Armande de Rajols. Germaine’s new stepmother hated the child from the moment she first saw her. And the abuse of Germaine began immediately.

Armande’s hatred for the child was such that she would not even allow her to stay in the house. Germaine was forced to sleep in the barn. She quickly became the shepherdess, tending the sheep in the fields. The area was infested with wolves, and she lived in constant fear that the wolves would kill her, especially at night.

Germaine was virtually forbidden to come into the house and to have contact with her own family. Amazingly, her father never defended or protected her. Even the siblings began mistreating her.

How a child could withstand such abuse is hard to fathom, but Germaine had been gifted with an extraordinary sense of God’s presence in her life and of spiritual things. Her life of loneliness and neglect began to become a source of blessings and peace within her. She even began offering her hunger and pain from malnourishment up to God.

Filled with abundant grace, she became advanced in the virtues of humility, patience, and love of neighbor. Germaine was never sent to school like her siblings and was only given a brief introduction to the catechism. But she listened to the children leaving religion class and learned as much as she could from them. Her love for Jesus in the Blessed Sacrament and His Virgin Mother became a mark of this young girl.

Although most times isolated and lonely, Germaine embraced a life of penance and prayer. She would take the meager amounts of bread she received and share it with the poor even though she was virtually starving. She attended Mass daily and prayed before the Blessed Sacrament anytime she could sneak away from her flock. She always counted on the angels to guard the sheep and apparently they did. Although wolves lurked nearby in the forest, never once was a sheep lost.

Miracles began to surround Germaine. There was a stream nearby, which had to be crossed to get to morning Mass. When it rained, which was often, the stream would turn into a rushing river and become dangerous as the waters began to surge and sweep violently through the valley. Several times, people witnessed Germaine standing and praying with outstretched hands, and the waters parted, letting her pass across.

Another time she had brought extra bread she had saved wrapped in her apron to give to the poor. Her wicked stepmother followed her in hopes of showing people how she “stole” from her family. After catching up to Germaine, she made her open her apron in front of the townsfolk. The only thing that tumbled out was summer flowers. It was the middle of winter, and people suddenly realized that this young woman was someone special. It was reported that Germaine took some flowers in her hand, looked at her stepmother and said, “Mother, God sends these to you as a sign of His forgiveness.”

Germaine was also given credit for being an intercessor for cures for blindness, deformities, and for multiplying food for a starving community in Bourges in 1845.

Sick and malnourished, Germaine Cousin was found dead in the barn lying on a stack of twigs. She was 22 years old and had lived in the barn for 17 years. When her body was exhumed 40 years later, it was found to be fresh and perfectly intact. It was proven that it had not been embalmed or treated in any way.

Germaine Cousin was canonized a saint on June 29, 1867, by Blessed Pope Pius IX. She is the patron saint of child abuse victims, disabled people, and the abandoned. Her feast day is June 15.

Read more:
The Ugandan Martyrs are perfect intercessors for these times