Writer of 'The Lord of the Rings' was an artist and parent who loved storytelling.

The books of J.R.R. Tolkien are full of surprises. An exhibit in New York about Tolkien’s artwork has some nice surprises as well, and one of the best has to do with his fatherhood.

Long before John Ronald Reuel Tolkien (1892-1973) published his Lord of the Rings trilogy, he was honing his craft as a storyteller with his four children. One very special way he did this was through letters he would send them every December, under the name of Father Christmas, an English name for Santa Claus.

One of those letters is on display at Tolkien: Maker of Middle-earth, at the Morgan Library and Museum in New York City. Elegantly calligraphed and illuminated like the page of a medieval prayerbook, the letter tells of gremlins who got into Father Christmas’ shop and stole the sled that Tolkien’s son had wished for. “I’m making a new one for you,” he wrote. “I hope I have it ready on time.” 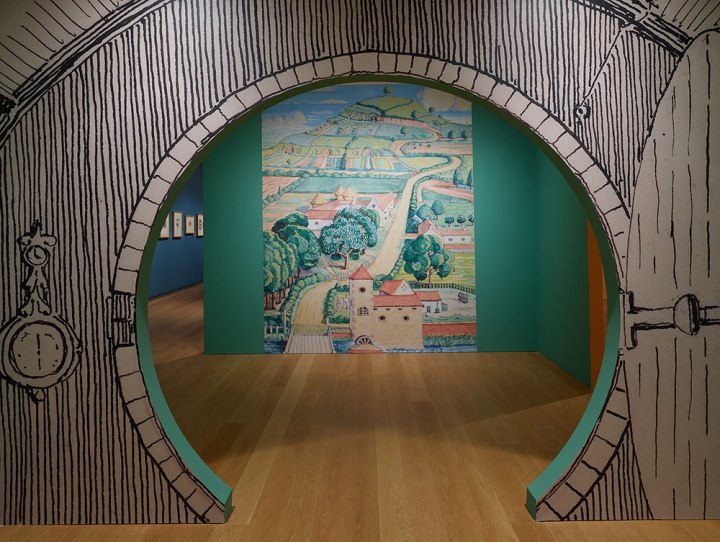 Such letters, which Tolkien’s children received from 1920 to 1942 and have preserved for posterity, often were accompanied by imaginative drawings. There’s a watercolor, for example, of Father Christmas standing on a snowy landscape at the North Pole, admiring what Tolkien imagined to be the Northern Lights. The scene is replicated in miniature to serve as the postage stamp on the envelope.

This section of the exhibition points to other aspects of the beloved author’s work. Many of the walls in the exhibit are adorned with watercolors of scenes that Tolkien also describes in his fantasy works and the maps he drew of Middle-earth—before he even began writing.

The narrative aspects of the letters also remind us that The Hobbit began its life as a series of bedtime stories Tolkien told his children. In fact, as the exhibit tells us, the kids were quite upset with their father when he went ahead and published The Hobbit. Why was he sharing “their” story with the rest of the world?

Tolkien: Maker of Middle-earth also reminds us that the author’s own childhood as an orphan was a time when he already showed signs of being imaginative and artistic.

Most of the pieces in this show come from the Tolkien Archive at the Bodleian Libraries (Oxford), but also from Marquette University and private lenders, in addition to the Morgan’s own holdings. The Morgan says the show is the largest collection of Tolkien material ever assembled in the United States, with 117 objects on view: family photographs and memorabilia, Tolkien’s original illustrations, maps, draft manuscripts, artifacts, and designs related to his books. Notable objects include draft manuscripts of The Hobbit and the original manuscripts of The Lord of the Rings and The Silmarillion, displayed alongside watercolors, dust jacket designs, and drawings.

Playfully, the guidelines for visitors include the strict requirement that viewers of the show wear shoes at all times and refrain from carrying wizard staffs, scepters, axes, bow and arrows, or swords while walking through the exhibit.

Some critics have opined that the show overlooks an important aspect of Tolkien’s life and creative output, his Catholic faith. As if to respond to that complaint, a tour guide who led a group through the galleries on a recent Thursday afternoon mentioned a couple of times how Catholic Tolkien’s Lord of the Rings is—depicting, as it does, a fight between good and evil.

John T. McQuillen, the curator of the exhibit, also acknowledged Tolkien’s Catholicism in a recent interview.

“He’s writing stories, he’s not writing down his own personal beliefs,” McQuillen told the Observer. “There are elements of what you might call Catholic faith that come up in The Lord of the Rings and The Hobbit. But unlike C.S. Lewis’ Narnia cycle, the religious influences are not so overt.”

Tolkien: Maker of Middle-earth runs until May 12.