How does Satan’s power measure up to God’s? 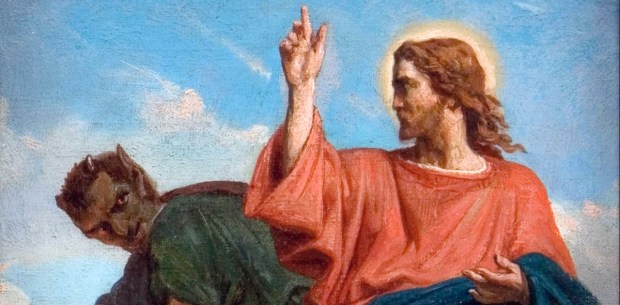 The struggle between good and evil is real, but is it a “fair fight”?

Many cultures have a belief that the forces of good and evil are in an eternal battle. While good eventually triumphs over evil in many of these belief systems, they nevertheless maintain that both forces are equal in power. Sometimes this idea is expressed as two sides of the same coin, emphasizing the idea that good and evil stem from the same source.

Is this idea shared by the Christian religion?

The Catholic Church has a different stance. While recognizing the devil’s work in the world and his many talents and powers, the Church affirms that Satan is merely a creature, unable to rival God in any way possible.

God created Satan originally as a good angel, possessing like all the angels a great intellect as well as free will. Satan’s pride led to his ultimate fall, and while God permits him to tempt humans on earth, his power is regulated by God.

The Catechism of the Catholic Church offers a brief explanation behind this mystery of the Christian faith.

The power of Satan is, nonetheless, not infinite. He is only a creature, powerful from the fact that he is pure spirit, but still a creature. He cannot prevent the building up of God’s reign. Although Satan may act in the world out of hatred for God and his kingdom in Christ Jesus, and although his action may cause grave injuries – of a spiritual nature and, indirectly, even of a physical nature- to each man and to society, the action is permitted by divine providence which with strength and gentleness guides human and cosmic history. It is a great mystery that providence should permit diabolical activity, but “we know that in everything God works for good with those who love him.” (CCC 395)

The question of how and why there can be so much evil in the world is a difficult one to answer, and as humans we will never full comprehend in this “vale of tears” the reasons why God permits such things to happen. Nevertheless, we know confidently that God is infinitely more powerful than Satan or any demon who may try to tempt us.

So, no. It’s not a “fair fight” between good and evil, and God thankfully does have the upper hand. It’s up to us to recognize that and not be fooled by Satan, who tries to make us think he is more powerful than he is, and that we should obey him, taking the fruit from the Tree of Knowledge.

May the resurrection of Jesus remind us that while death and evil may appear powerful, they do not have the final word.

Read more:
7 Exorcism prayers to cast out a demonic presence