Looking out for the leaven of the Pharisees and Herod, as present today as ever 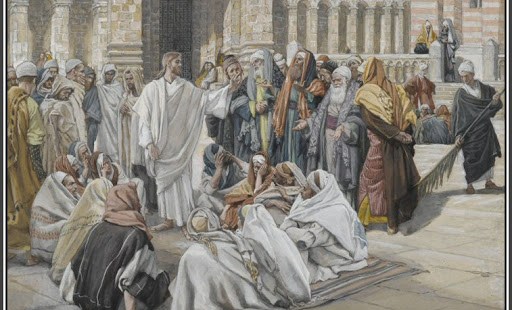 Can’t we talk about whether or not we grow in Christian freedom by elbowing our way to the public trough?

It helps to have poisons clearly and properly labeled, doesn’t it? Such labels keep you from ingesting poisons, and help you to aid those who may have ingested poisons themselves. Jesus was clearly an advocate of truth-in-labeling: “Take heed and beware of the leaven of the Pharisees, and of the leaven of Herod” (Mark 8:15). What kinds of poisons is Jesus warning us about?

“The leaven of the Pharisees.” This poison masquerades as divinely-inspired wholesomeness. It’s hypocrisy paying false tribute to piety and sanctity. Worse than the fabled “wolf in sheep’s clothing,” this is a wolf in shepherd’s clothing.

So dangerous is this poison that every cleric should examine his conscience daily and ask, “Have I served as a shepherd, as a hired hand, or as a wolf?” If we clerics ask that question while we live, we may have time to repent. When Our Blessed Lord asks us that question about our service, it will be too late. We must know that we will be held to a higher standard. No one can afford to presume upon God’s mercy.

The leaven of the Pharisees can be seen (HERE) where then-Cardinal McCarrick told his brother bishops gathered in Dallas (in 2002!) to address the clerical sexual abuse of minors: “We must move forward. We must put an end to this. We cannot have Dallas two and Dallas three and Dallas four.” How many times have we been told, “This time it will be different!”

The leaven of Herod. This poison masquerades as civic high-mindedness, purporting to serve citizens, when in fact it’s a murderous ruthlessness operating under the color of authority. This leaven can be seen at work in the U.S. Senate refusing to allow health care to babies who survived their own abortion. This work is done by people who shed tears about children being separated from their families, and demand spending vast sums of other people’s money because, “It’s for the children!” The leaven of Herod can be seen lighting up public buildings to celebrate legislation allowing the abortion of children up to the point of birth.

In the United States, where parishes are closing, Mass attendance is declining, many religious communities face extinction, and where we’re rocked by scandal—the labor pool for the spiritual works of mercy and the donor pool for the corporal works of mercy are drying up. It would seem that the only way to keep the wheels on the bus is for church leadership to become dependent on the public purse. Can’t we talk about this? About how we got here? About whether we should stay here? Can’t we talk about whether or not we grow in Christian freedom by elbowing our way to the public trough? Can’t we talk about whether God will bless us if we choose to care for the poor out of our own pocket rather than through the taxes that Herod has collected at the point of a sword? Are these really forbidden topics?

By the time this is published, Lent will be one week away. Already, people are talking about what they plan to “give up” for Lent. People consider surrendering, for a time (but not on Sundays!) luxuries that they know can be bad for them: chocolate, alcohol, tobacco… Can we consider “fasting” from public funds? We encourage people to “do something positive” for Lent—some act of charity or witness. Could we do something positive by beginning to form parishes and religious communities healthy enough to be independent from Herod? We might even start small—let’s start by having an honest conversation about whether we have become addicted to the leaven of Herod.

Maybe our Lenten meditation can begin with this thought (Psalm 146:3): “Put not your trust in princes, in mortal man, who cannot save.” Perhaps we can alter the text slightly: “Put not your trust in bureaucrats, in legislators, in government agencies, who cannot save.” I have written about how saying “Jesus, I trust in you!” requires that we add, “Jesus, I don’t trust in myself!” Let’s not trust the leaven of the Pharisees. Let’s not trust in the leaven of Herod. And let’s refuse to accept the leaven of those two joined together.

When I write next, I will begin a series of Lenten reflections. Until then, let’s keep each other in prayer.