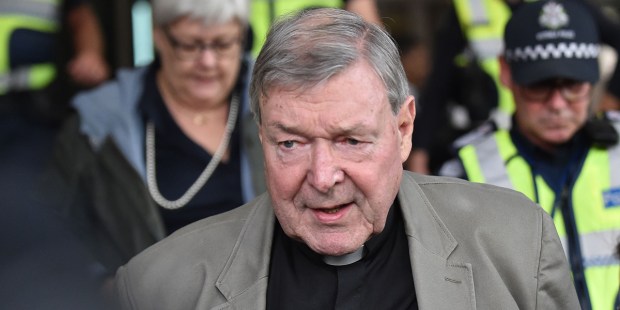 As appeal process plays out, cardinal is prohibited from public ministry or contact with minors

Archbishop Peter Comensoli, a successor of Cardinal George Pell as the current prelate of the Archdiocese of Melbourne, says he is “surprised and shaken” by the outcome of Pell’s trial on sexual abuse.

A Vatican spokesman echoed the archbishop’s statement, saying, “We await the outcome of the appeals process, recalling that Cardinal Pell maintains his innocence and has the right to defend himself until the last stage of appeal.”

Meanwhile, however, Pell is forbidden to exercise public ministry or have contact in any way or form with minors.

The Vatican aligned itself with the Australian bishops conference, which stated, “The same legal system that delivered the verdict will consider the appeal that the Cardinal’s legal team has lodged. Our hope, at all times, is that through this process, justice will be served.”

The jury from an earlier trial was unable to reach a verdict, and it’s reported that that jury ended in a 10-2 deadlock in favor of Pell.

Various reports have noted both anti-Catholic sentiment in Australia and certain seeming inconsistencies with the case. Only of the of alleged victims is still alive. The other died of a drug overdose in 2014, after twice telling his mother that he had never suffered abuse.

Pell is alleged to have abused two choir boys somewhere within the cathedral sacristy immediately following a Mass.

A Melbourne court ordered that Pell be taken into custody on February 27; he is scheduled to be sentenced March 13. The Vatican announced his case would be investigated by the Congregation for the Doctrine of the Faith.

“After the guilty verdict in the first instance concerning Cardinal Pell, the Congregation for the Doctrine of the Faith will now handle the case following the procedure and within the time established by canonical norm,” Alessandro Gisotti, interim director of the Vatican press office, said on February 27.

Here are the statements:

From the archbishop of Melbourne:

As is now publicly known, Cardinal George Pell has been found guilty of historical sexual crimes relating to two young people at St Patrick’s Cathedral, Melbourne. This follows two trials, the first of which could not reach a verdict.

While acknowledging the judgement of the jury, I join many people who have been surprised and shaken by the outcome of the second trial.

I fully respect the ongoing judicial process, noting that Cardinal Pell continues to protest his innocence. An appeal against the verdict has been lodged. It is important that we now await the outcome of this appeal, respectful of the ongoing legal proceedings.

All other charges relating to Cardinal Pell, except those subject of the appeal, have been discontinued.

My thoughts and prayers are with all victims who have been abused by clergy, religious and lay people in the Archdiocese of Melbourne at this challenging time, and I renew my personal commitment to do all I can to ensure victims of such abuse in Melbourne receive justice and healing.

At this time, I also acknowledge all in the Catholic Church who are walking with survivors and communities harmed by the scourge of abuse, and who are committed to building a culture of safety for our children and vulnerable people.

At this time, may I assure you that I keep all involved in my prayer.

From the Australian bishops’ conference:

The news of Cardinal George Pell’s conviction on historical child sexual abuse charges has shocked many across Australia and around the world, including the Catholic Bishops of Australia. The Bishops agree that everyone should be equal under the law, and we respect the Australian legal system. The same legal system that delivered the verdict will consider the appeal that the Cardinal’s legal team has lodged. Our hope, at all times, is that through this process, justice will be served. In the meantime, we pray for all those who have been abused and their loved ones, and we commit ourselves anew to doing everything possible to ensure that the Church is a safe place for all, especially the young and the vulnerable.

From the “ad interim” Director of the Holy See Press Office, Alessandro Gisotti:

The Holy See agrees with the statement issued by the President of the Australian Catholic Bishops Conference regarding the sentence of guilt in the first instance concerning Cardinal George Pell.

This is painful news that, as we are well aware, has shocked many people, not only in Australia. As already expressed on other occasions, we have the utmost respect for the Australian judicial authorities.

Out of this respect, we await the outcome of the appeals process, recalling that Cardinal Pell maintains his innocence and has the right to defend himself until the last stage of appeal.

While awaiting the definitive judgement, we unite ourselves with the Australian bishops in praying for all victims of abuse, and reaffirm our commitment to do everything possible so that the Church might be a safe home for all, especially for children and the most vulnerable.

In order to ensure the course of justice, the Holy Father has confirmed the precautionary measures which had been imposed by the local Ordinary on Cardinal George Pell when he returned to Australia. That is, while awaiting the definitive assessment of the facts, as is the norm, Cardinal George Pell is prohibited from exercising public ministry and from having any voluntary contact whatsoever with minors.