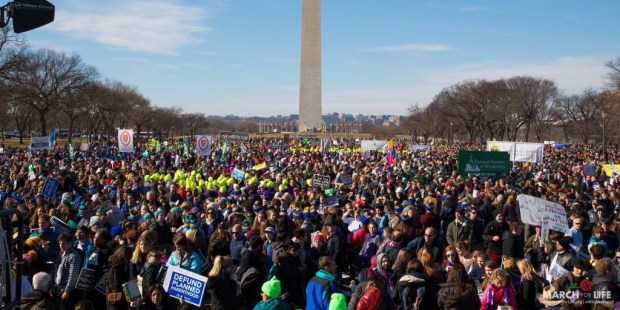 In the last month, Democrats and younger people, in particular, are significantly more likely to oppose abortion.

Several new state laws regulating the termination of pregnancy seem to have had an effect on Americans’ views on abortion, shifting opinion more toward pro-life stances.

A new Marist poll has found a significant shift in opinion since a similar survey was conducted, only one month before.

The survey, taken Feb.12-17 in the wake of efforts in several states to legalize abortion up until birth, showed significant shifts led by Democrats and those under 45 years old.

“Current proposals that promote late-term abortion have reset the landscape and language on abortion in a pronounced – and very measurable – way,” said Barbara Carvalho, director of The Marist Poll.

At the same time, the survey found that opposition to late-term abortions is overwhelming. By about three to one (71 percent to 25 percent), Americans say abortion should be generally illegal during the third trimester. This majority includes 60 percent of Democrats, 72 percent of independents and 85 percent of Republicans.

In addition, the poll found that 80 percent of Americans would like abortion limited to, at most, the first three months of pregnancy—an increase of five points since just last month.  This includes 65 percent of those who identified as pro-choice, as well as strong majorities of Democrats (64 percent), Republicans (92 percent) and independents (83 percent).

The proportion overall has shown a consensus over time on the issue with three-quarters to eight-in-10 Americans supportive of restrictions on abortion. The 80 percent figure is, nevertheless, a significant increase since January – a noteworthy change in what has been a very stable measure.

“Arguments in favor of late-term abortion are simply not convincing the American people,” said Carl Anderson, CEO of the Knights of Columbus, the organization that sponsored the survey, both in January and February. “If anything, since these proposals have been unveiled, people are moving noticeably in the pro-life direction. It is now clear that these radical policies are being pursued despite the opposition of the majority of Americans of both parties.”

A flurry of state-level legislative activity in January included New York’s passage of a Reproductive Health Act, which allows all abortion up to 24 weeks and increases access after that point. Gov. Andrew Cuomo came under fire not only for his promotion of the bill but also his celebration of its passage into law by ordering New York City’s Freedom Tower to be lit up in pink. Meanwhile, a state legislator in Virginia elicited howls of protest when she affirmed during a hearing that a bill she was sponsoring would allow abortion even during labor.