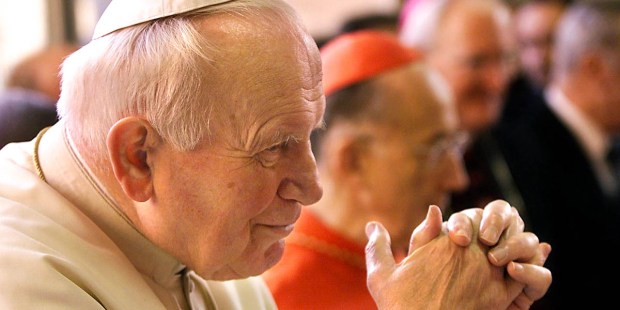 It’s an important one that we don’t always remember or give priority to.

Lent is a beautiful time for spiritual renewal. For many centuries it has been the custom to “give up” something for the 40 days of preparation for Easter. This often consists of abstaining from such things as chocolate or TV, but St. John Paul II had a different idea of things we should give up.

In other words, while it’s noble to sacrifice those things in our lives that are non-essential, it’s also important to give away things that we do need, giving them to those who are in a more desperate situation.

The Polish pope expanded on this concept in 1980, explaining that “True sharing, which is a meeting with others, helps us to free ourselves from those bonds that enslave us. And, because it makes us see others as brothers and sisters, it enables us to rediscover that we are children of the same Father, ‘heirs of God and coheirs with Christ’ (Romans 8:17), from whom we have incorruptible riches.”

John Paul II saw Lent as an opportunity to empty ourselves in Christian charity, doing good to the most vulnerable of society.

As you prepare for Lent, consider how you can be of service to your neighbor and give things up, not only the non-essentials, but also the essentials of life, recognizing the plight of those suffering among us.

Read more:
Why We Need to Stop Giving Our Junk to the Poor

Read more:
Pope Francis offers a “worksheet” for Lent: Check it out!