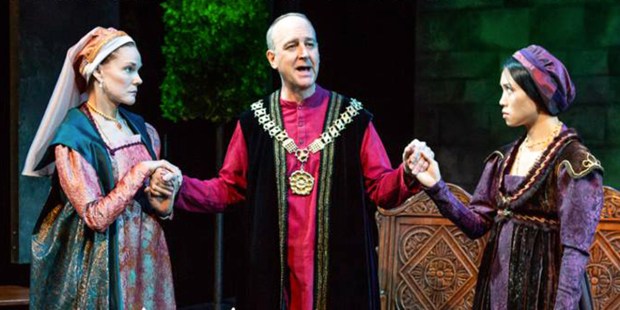 The Fellowship for Performing Arts’ revival of the Tony Award winning play A Man For All Seasons is about to conclude a successful run in New York. But the FPA has a full lineup of its signature theater pieces for other cities around the country.

The New York City-based theatrical production company, founded by its Artistic Director, Max McLean, produces theater from a Christian worldview that engages diverse audiences. In addition to its annual New York season, where it has produced Shadowlands, C.S. Lewis Onstage: The Most Reluctant Convert, The Great Divorce, Martin Luther on Trial, and The Screwtape Letters, FPA tours at universities such as Brown, Princeton, and UC-Berkeley and in major performing arts centers across the country. In the past year, over 65,000 people have experienced an FPA production.

What led you to start Fellowship for Performing Arts? Was there a need you saw for this in the theater world?

I understood firsthand the power of storytelling through theatre and had experienced the power of the gospel. FPA was an attempt to marry these two forces by raising the kind of budgets required to tell great stories with excellence from a Christian worldview that could reach a diverse audience in mainstream settings.

Tell me about your thought process in choosing the various works you’ve produced, especially A Man for All Seasons.

Robert Bolt’s magnificent play tells the story of Sir Thomas More, who has to choose between his allegiance to God whom he loves and his duty to his King, Henry, the 8th of that name.  It’s the story of what happens when fierce political will collides with deep moral conviction. And the collision makes for great theater. I see More as a Christ figure, where the worst possible thing happens to the best possible person; an innocent man, working for the good and the true, finds himself decimated and destroyed. Yet watching this tragic figure face his doom, own it, and respond with courage, grace and even joy had a powerful, cathartic effect. I’ve wanted to do this play for over 20 years.

Your aim is to bring theater to audiences from a Christian worldview. What specifically do you hope to see in doing that? What fruits do you hope this effort will yield?

We are not blind to the fact that mainstream culture is increasingly unreceptive to the Christian worldview. Yet, our mission is to put forth a vision of Christianity through artistic expression that is imaginative, multi-layered, winsome and convicting so as to provide a counterpoint to the rising dominance of the secular world picture. Our approach is to engage the imagination which serves up the raw material of what we think about. If an idea does not capture the imagination, it will not carry the force to challenge one’s basic assumptions about meaning, morality, origin and destiny. This, I think, is the first step towards reassessment and change. FPA’s conviction is that art and theater offers a little more wiggle room to, as C.S. Lewis says, “steal past watchful dragons” of bias and stigma. We can say things that one couldn’t say otherwise—about God, the gospel, the divinity of Christ within an engaging theatrical experience.

And it looks as if it is having an impact. One critic described FPA as a “A unique company devoted to Christian theater for secular audiences … that is no easy thing … even a Jewish atheist such as yours truly can find their stuff worthwhile seeing, discussing and even recommending … Nothing proselytizes as effectively as a good show that does not proselytize.”

TimeOut NY called us “a genuine curiosity: unabashed Christian theater tackling weighty moral issue.” TheaterMania said, “FPA offers something that has been sorely missing from the New York theater scene for far too long: high-quality, challenging theater from a Christian perspective.” National Review described us as a “counter-cultural force.”

I offer these quotes because our work is more caught than taught.  It is a core value of ours to let others who have seen our work speak on our behalf. It carries much more weight than anything I can say.

What effects have you noticed on audiences? Are there anecdotes you have heard about people maybe having conversions because of what they experienced in the theater?

I’m not too comfortable with this question because it carries within it the assumption that art and theatre must justify its existence by some sort of evangelism metric. I believe that selecting the right material, executing it to highest levels that our budgets will allow, guarding our hearts and trusting the Holy Spirit to do His work will bear fruit for eternity. As C.S. Lewis says, the feeling of being allowed to play a part in someone’s conversion is “awe and fear: such as a boy might feel on his first being allowed to fire a rifle.”

Having said that, I will attempt to answer this question for those who have not had the chance to experience our work in action. To begin with, I can’t tell you how many patrons reveal by their look and lack of speech how moved they were after seeing A Man for All Seasons in New York. They come out of the theater in a pretty emotional state, really broken up about it.  That appears to be a reflection of the Holy Spirit working in their hearts.

As for our other works, I’ll provide a few short comments. In Boston a patron shared with me how a particular moment in The Screwtape Letters triggered a realization that led her to faith in Christ. In Milwaukee, a man shared how our production of The Most Reluctant Convert rekindled his faith in Christ. In Dallas, a lady said that the show compelled her to take the “leap of faith.” In New York, a young woman was so moved by The Most Reluctant Convert, she asked, “What should I do?” I suggested that she read John’s Gospel. A former atheist wrote me a letter telling me that she can’t tell her conversion story without referencing the afternoon a friend invited her to see The Screwtape Letters in Thousand Oaks, California. It was her first step toward realizing her lostness and putting her faith in Christ.