‘Unplanned’ is a movie full of surprises, including some that happened during production 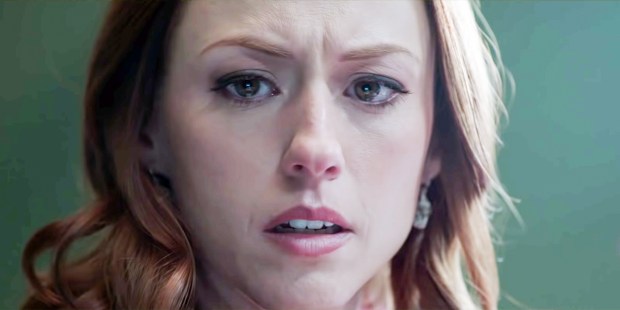 There may be more that was unplanned about the upcoming movie Unplanned than producers had envisioned.

The film, set to open in theaters March 29, tells the story of Abby Johnson, whose 2012 book Unplanned told the story of her conversion from being a dedicated abortion clinic manager to a pro-life activist. Johnson, a volunteer who rose through the ranks to be director of a Planned Parenthood facility in Texas, quit her successful career after witnessing an ultrasound of an unborn baby struggling to escape an abortionist’s suction tool. She went on to found a ministry called “And Then There Were None,” which assists abortion industry employees who have similar changes of heart and struggle to start new lives.

Cary Solomon and Chuck Konzelman, the writers/co-producers of God’s Not Dead, wrote and directed the film.

Actor Ashley Bratcher (Princess Cut), who portrays Abby Johnson, was one of the first to deal with certain things that came up—unplanned—in production. She had brushed off suggestions from an Instagram follower who felt certain that the role was meant for her. Then Bratcher read the script and was taken by Johnson’s story. After auditioning, she received a call from producer Chris Jones (Box One Forty-Seven) offering her the role and asking if she could get on a plane in four hours, as shooting was to begin the next day.

She arrived on the set and “hit the ground running,” feverishly learning her lines and all she could about Abby Johnson. Four days later, her mother called her. She knew her mother had had an abortion when she was young, so Bratcher was hesitant to tell her about the project, thinking it might open old wounds. But when she did, her mother broke down sobbing.

“She said ‘Ashley, I need to tell you something that I never told you before,'” Bratcher related during a recent press junket and pre-screening in New York. “‘When I was 19, I was at the clinic again, and they called my name and I was examined by a very pregnant nurse. And I got really sick to my stomach, and I knew that I couldn’t go through with it. I got up and walked out, and I chose to have … you.’

“What was so mind-blowing about that is that I never knew about it until I had accepted this role, and it was just such confirmation to me, that God plans our steps from conception, that my story would come full circle, that it didn’t make sense to me at all that I even had the opportunity to play Abby,” Bratcher said. “It was really courageous for my mom to tell me that, because it became so evident that God’s hand was involved, and I think it brought healing to her.”

Bratcher’s mother is an extra in the film, as one of several pro-life protesters who place roses in the fence outside a clinic where they have been praying.

Johnson herself may have provided one of the biggest examples of “unplannedness,” as she spoke after the screening at the Sheen Center for Thought and Culture Feb. 21, which was sponsored by the Human Life Review. After a desultory youth that included two of her own abortions (one of which is graphically depicted in the movie), she married, but after her and her husband’s first child, she felt she was “one and done.” Later, after leaving the abortion industry, when she and her husband, Doug Johnson, were feeling more and more drawn to the Catholic Church, she confided that she feared she would end up like the stereotypical super-Catholic couple with multiple children.

When she walked out on stage for a panel discussion with Bratcher, Jones and emcee Kathryn Jean Lopez of National Review, it was obvious that she was not “one and done.” In fact, she said, she was carrying Number Eight.

Johnson also said that when she left Planned Parenthood, she started to feel that there should be a “ministry” for people like her, who need financial, moral, emotional and spiritual support in going from making a living off of abortion to living and working in accordance with pro-life values. She could find nothing, and she said she prayed that someone might start such a ministry.

In a lightbulb moment, she said, she realized God was calling her to begin such an apostolate.

Another actor in the film, Julie Wilkinson, is probably happy that Johnson rose to the challenge. According to Bratcher, Wilkinson had left the abortion industry and “carried all this guilt for years.”

“She had searched for a ministry specifically geared toward people who had worked in the abortion industry and there wasn’t one,” Bratcher said in an interview. “She said probably the only person she could have talked to was someone who had been there, and so when she found out about Abby’s ministry, it was what changed her life.”

Wilkinson portrays an operating room nurse in the film.

There may have been a lot of surprises during film production, and audiences too will be surprised by what they see. Some of it will shock viewers, and the film recently received an R rating from the Motion Picture Association of America. It’s a rating that surprised producers, who pointed out that in many states, teens under 17 are able to get an abortion without their parents’ permission, but won’t be able to see a film portrayal of one without being accompanied by an adult.

But Johnson hopes that Unplanned helps people clarify their positions so that they will avoid being surprised one day in a very radical way. If abortion supporters or even those who work in the industry go to see the film, she feels, it will “really prick their conscience and [make them] question what they’re doing. Even if people are pro-choice, everybody should know what they support. People might watch this film and walk out and say ‘I’m still pro-choice,’ and that’s fine. But they’ll never be able to walk away and say ‘I didn’t know.’ … Their culpability will be theirs, and they will have to make a decision.”

It’s more likely that supporters of the pro-life movement will turn out to see the film. Johnson and the filmmakers suspect that many viewers will be like Bratcher’s mother, who had abortions in the past, or Julie Wilkinson, who may still be dealing with guilt about participating in the taking of unborn innocent life. One thing that is planned is an affiliated campaign to reach out to people who are still hurting, to direct them to resources that can help provide emotional and spiritual healing.

Ultimately, Johnson said, Unplanned “is about showing everybody that our pasts are redeemable. Not even just the issue of abortion, but anything that we’ve been through in our lives, God is ready to redeem that and to really use it for his glory. So it’s really his story in the end.”