Motes and beams: What does the Gospel really say? 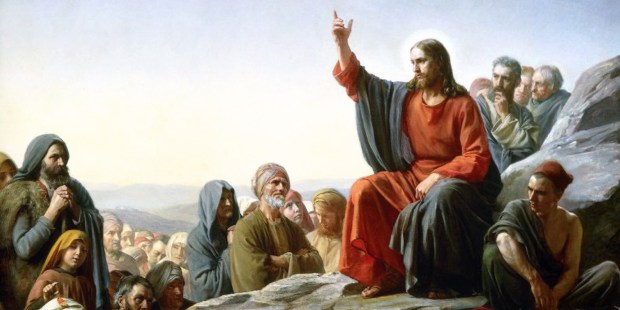 A closer look to this proverb can reveal more than we think.

We find the proverb of the beam and the mote —some sources refer to it (mistakenly) as a “parable”— in the Sermon on the Mount in the Gospel of Matthew (7:1-5) and in the Sermon on the Plain, in that of Luke (6:37-42). The formulation in both is quite similar, and in both cases it follows the general exhortation “judge not” and the warning “with whatever measure you measure, it will be measured to you.” Broadly speaking, this fairly brief discourse is a warning regarding the dangers of judging others, and an invitation to avoid hypocrisy, censoriousness, and the feeling of an alleged moral superiority. But a closer look at these lines might reveal some probably unexpected, delicate aspects of such perils.

Casting out a mote from someone’s eye is always difficult. It requires not only having a clear eye of one’s own, but also a very particular delicacy of touch, as Hastings notes in his Dictionary of the New Testament. That is, even if it might seem quite simple (specially when compared to the removal of a beam) it is nevertheless a task that that implies and requires genuine concern for the well-being of the other (a concern that is indeed non-compatible with uncharitable judgment or a pretended zeal for righteousness). In a way, one could say this is yet another formulation of the Golden Rule, which requires active “doing unto others”.

It is often the case that, to understand some implications of some passages in the Gospel we need to look not only at the original Greek text, but also to other passages in the Bible where the same words are used, or where similar situations are described. In this case, going back one chapter in the Gospel of Matthew helps us understand what we might broadly refer to as “the role of the eye.” In 6:22-23, we read Jesus saying “the eye is the lamp of the body” and explaining that if one’s eye is healthy, one’s body would be “full of light,” but if one’s eye is unhealthy, one’s whole body will be “full of darkness,” finishing with the admonition, “If then the light in you is darkness, how great is the darkness!” If a mote is enough to make one’s eye uncomfortable (that is, “unhealthy”), one can only imagine how “sick” one’s eye would be with a beam stuck in it. What is this disease about?

Read more:
What does “poor in spirit” mean?

The proverb “Why do you see the speck in your neighbor’s eye, but do not notice the log in your own eye?” seems to have been, according to most scholars, a popular one in the Middle East in Jesus’ day. That is, he must have picked it up from common, everyday popular wisdom. The Greek words used for “mote” and “beam” in the Gospel (“karphó” and “dokós”) are particularly interesting: whereas “dokós” indeed refers to a large wooden beam (generally, the main one, which receives the other beams in a floor or in a roof —thus suggesting Jesus was indeed familiar with the process of building a house), “karphó” refers to any small body, but in this context, it is understood it means either a splinter or a small twig. Whereas one can indeed have a twig in one’s eye, a beam cannot obviously be literally found in one’s eye. This is one of those classic proverbs in which a touch of exaggeration makes the point, as in the proverbial camel through the needle’s eye, or as in plucking one’s eye (again, the eye!) out if it causes you to stumble.

Now, it is clear this proverb is applicable in many different contexts. It is true that those who are too zealous and eager to correct others quite often end up neglecting their own self-care. The proverb points at the need to begin one’s quest for righteousness with one’s own actions. In fact, a person who is occupied with the never-ending task of self-discipline and self-judgment will certainly not be the eager censor of others, nor will care for personal superiority. However, this doesn’t render that person blind to moral distinctions: on the contrary, the “eye” that has exercised itself in such discipline will certainly be “full of light”: the kind of light we need when we try to cast out a mote from someone’s eye. As Hastings notes, “love and pride are both quick to observe; but with what different results!”