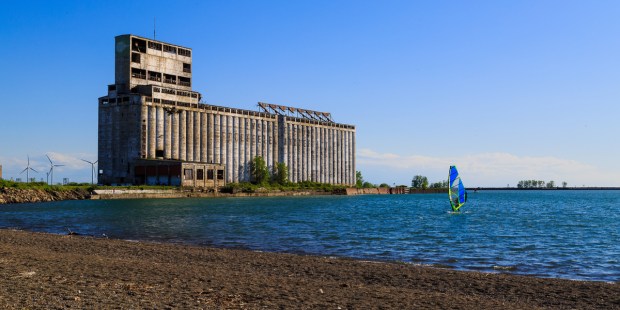 Voters approve bill of rights for Great Lake, to try to save it from devastating pollution.

Lake Erie means many things to many people: a source of livelihood and recreation for folks working and living along its shores; one of the five Great Lakes that generations of school children remembered the names of by thinking of their initials, H.O.M.E.S.; the source of the water that passes through Niagara Falls and the nearby hydroelectric dams that feed energy to parts of Canada and the U.S.

Now, residents of Toledo, Ohio, have voted to give Lake Erie a new meaning: it is a person.

In a special election February 26, Toledoans approved a “Lake Erie Bill of Rights” referendum by a 61-39 margin. The ballot measure calls for Toledo’s city charter to be amended in such a way that it declares Lake Erie has a right to carry a smaller environmental burden.

The referendum does not actually say that the lake is now a person. But only persons have rights.

“The failing health of Lake Erie, the world’s 11th largest lake, is at the heart of one of the most unusual questions to appear on an American ballot,” the New York Times wrote prior to the vote. “Should a body of water be given rights normally associated with those granted to a person?”

The 9,910-square-mile body of water is plagued by ecosystem-disrupting invasive species, fouled by agricultural runoff and suffocated by oxygen-depleted “dead zones” caused by toxic seasonal algae blooms that are so large they can be seen from outer space. … In the summer of 2014, Ohio’s fourth most populous city was effectively shut down for three days when its drinking water supply was deemed off-limits as off-the-charts levels of algal bloom-boosting phosphorous drained into the lake from upstream farms. (A nutrient found in manure and fertilizer, phosphorous is the main culprit in algae blooms.) This marked the first time in U.S. history that an algal bloom rendered a city’s water supply unsafe to consume.

“Toledo represents only a fraction of the entire Lake Erie basin, but it lies along the heart of the western Lake Erie shoreline — the most ecologically fragile and most biologically dynamic part of the Great Lakes basin because of its shallowness and relative warmth. Just outside the Toledo area lies some of North America’s top fishing and birding opportunities,” explained the Toledo Blade.

The crisis in 2014 led to environmentalists’ pushing for the bill of rights for the lake.

Although the referendum (which can be read here, starting on page 4) passed by a healthy margin, the vote drew only about 9 percent of the city’s 182,451 registered voters.

Nevertheless, it is being hailed as a watershed.

“The vote — and even the presence of the initiative on the ballot — marks a radical shift in thinking that could potentially be replicated elsewhere,” Mother Nature Network’s Hickman wrote. “Can other bodies of water — or any sort of natural feature for that matter, be it a desert or a river or a forest — be granted the same legal rights as human beings?”

There have already been examples of that happening, he points out, such as in New Zealand, where personhood was granted to the Te Urewera forest in 2014. Ecuador in 2008 drafted “rights of nature” provisions directly into its constitution. And India recently bestowed legal rights to the Ganges and Yamuna rivers.