The powerful impact exercise has on our emotions — and vice-versa 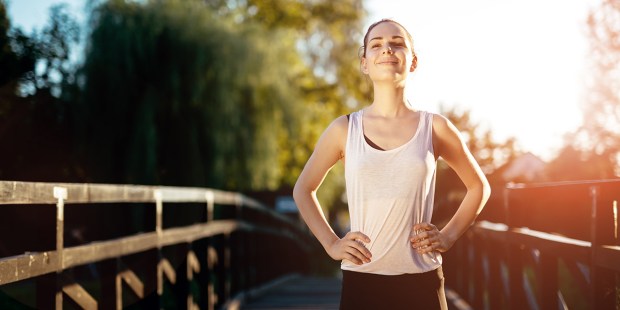 The mind-body connection is stronger than most of us realize, and we can take advantage of that.

About five years ago, before I developed a passion for fitness, I decided to break up my mediocre Zumba-and-boot-camp exercise video routine that I’d started after Lincoln (now 6) was born.

Inspired — of course — by something I read online, I set out to master what the article called “basic human movement patterns.” These were essentially just multi-joint bodyweight exercises like squats, push-ups, and sit-ups, interspersed with short but intense rounds of sprinting. It wasn’t a bad program by any means; those fundamental movements figure heavily in my own programming for my current job as a fitness trainer. But at the time, with no training and no one to guide me, I was quickly overwhelmed.

That’s an understatement. What actually happened was that I would get through the first round of squats and sprints, then start the push-ups. By the third push-up, every time, I had to stop because I was sobbing too hard to continue. The tears seemed to come out of nowhere, and I quickly abandoned the program because it made me feel like a basket case. I was convinced that normal people didn’t randomly cry during workouts … but actually, according to Furthermore, exercise often produces a physical manifestation of our emotions:

“Mood drives our behaviors, and that can ripple through into performance in workouts,” says Deanna Minich, Ph.D. … When researchers at Flinders University in Adelaide, Australia, interviewed athletes, they found that strong emotions, either positive or negative, were linked to better athletic performance. For example, you may sprint a PR after getting promoted—or after a unusually stressful meeting or argument with your partner.

If you’re sad or emotional coming into a workout, you could expect a release in the form of tears … To harness your current mental state to your advantage, Minich says that it’s helpful to determine which mindsets motivate you. “Emotions can be used as messengers for peak performance. If anger gets you going, then it’s good to know that about yourself to enable you to find ways to leverage it to its fullest.”

Unbeknownst to me at the time, I had post-partum depression that was manifesting itself primarily as anxiety. I also didn’t have the core strength necessary for a full push-up, but I didn’t know that either. All I knew was that I couldn’t do it right, no matter how hard I tried, which made me feel weak, hopeless, and fundamentally flawed. Hence the tears.

Several years later when I was learning to spar, I had to come to grips with just how deeply intertwined my emotions and my body are. I learned that stress and frustration are my friends in the ring, because they propel me to break plateaus by engaging the “fight” part of my fight-or-flight reaction. I also learned that confidence and optimism actually work against me in a fight by dampening my sense of self-preservation.

The connection between my mind and body got stronger the deeper I got into the world of fitness. I learned that different physical demands require a different emotional state; while frustration might be beneficial in the ring, it’s a hindrance when it comes to lifting weights. But I also began to learn how to harness my emotional state, and for the first time I realized that I didn’t have to allow my emotions to control me.

Some days are still easier than others. Yesterday, for example, I was so stressed that I spent the whole morning in an unproductive funk that I couldn’t quite shake. After lunch, I finally put on my sparring gloves and socks and spent an hour letting all that stress out onto my punching bag. I walked away feeling tired but infinitely calmer, more at peace with the world and with myself.

It’s been a while since I’ve needed to rely on a workout to get my emotions back in check, but I’m grateful for the reminder. The connection between our minds and bodies is incredibly powerful, even if we’re unaware of it. Being able to access that connection through exercise is a gift, and it’s one we should take advantage of.

Read more:
3 Ingenious ways to combine exercise and prayer, and find time for both