Everyday expressions that have their origin in the Bible 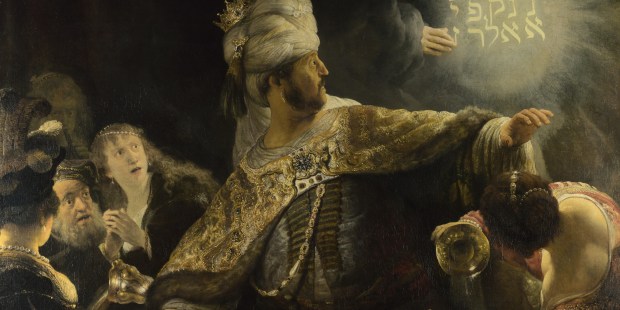 The writing is on the wall: you can see it for yourself, in Scripture.

Have you resolved to read a little of the Bible each day for Lent? Great. But if you haven’t, it might interest you that our language is replete with biblical expressions. Many have become so common that we don’t realize where they came from originally.

If you’re not reading the Bible regularly, take a look at these English-language phrases and their original meanings:

At the eleventh hour. In the Gospel according to St. Matthew, Jesus tells a parable to help his disciples better understand what he meant by “the Kingdom of Heaven.” He compared it to a scenario in which a householder needed some helpers to run his vineyard. Early in the morning, he went out to hire a few day laborers. Later in the day, he hired a few more, who were standing around doing nothing. The householder did the same a couple more times that day.

“At the eleventh hour” — the last hour of the work day, which has come to mean “the last minute” — he hired the final round of workers. At the end of the day, every worker received the same pay, leading those who were hired first to feel slighted. The householder reminded them that they received what they had agreed to and also argued that it was his right to do what he wanted with his own money.

At your wits’ end. In Psalm 107, the psalmist lists a number of ways God has rescued those in trouble or has forgiven those who have repented. In the section that begins, “Some went down to the sea in ships,” the psalmist describes a storm on the ocean that gets so bad that the sailors “reeled and staggered like drunken men, and were at their wits’ end.”

By the skin of your teeth. True, teeth don’t have skin, but the hyperbolic expression gives us the impression that something was accomplished by the narrowest of margins possible. Job, the famous Old Testament character who was plagued with a lifetime’s worth of afflictions and yet still had faith in God, is credited with the first use of this phrase. In Job 19, he rehearses all the trials he has been through, including an escape (he doesn’t say from what) “by the skin of my teeth.”

A drop in the bucket. We tend to think of this phrase when we know our efforts are small and insignificant in the grander scheme of things. But Isaiah the Prophet, who originally used the expression, applied it to something we normally think of as much bigger than ourselves. “Behold, the nations are like a drop from a bucket, and are accounted as the dust on the scales,” he wrote in chapter 40. Indeed, when you are thinking in terms of centuries and millennia, a nation, even an empire, can certainly look that way.

Eat, drink and be merry. Perhaps not the best thing to be thinking about between Mardi Gras and Easter Sunday, but this phrase can be found several times in the Good Book. In Ecclesiastes Chapter 8, the writer, who has been complaining of the vanity of all existence, says that “man has no good thing under the sun but to eat and drink and enjoy himself, for this will go with him in his toil through the days of life which God gives him under the sun.”

The concept, of course, is an appealing one, so it’s no wonder the phrase shows up in the New Testament as well. In a parable in which Jesus warns those who are satisfied with the comforts of this world, he puts the words in the mouth of an overconfident rich man, in Luke 12: “I will say to my soul, ‘Soul, you have ample goods laid up for many years; take your ease, eat, drink, be merry.'” He’s in for a surprise, of course. And, in his first letter to the Corinthians, St. Paul warns, “If the dead are not raised, ‘Let us eat and drink, for tomorrow we die.’ Do not be deceived: ‘Bad company ruins good morals.'”

To fall by the wayside. In Luke 7, Jesus tells the parable of the sower, an agricultural type who spread seeds around at the beginning of the season. Not all seeds come to fruition, of course. Some fell by the side of the road, where they did not flourish. If we want things to succeed, we don’t let the seeds of our efforts to fall by the wayside.

Feet of clay. It all started with a dream that the Babylonian King Nebuchadnezzar had. Only the prophet Daniel could explain to him the meaning of the vision he had of a creature made of a golden head, silver breast and arms, bronze belly, iron legs and “feet partly of iron and partly of clay.” A stone was cut out by no human hand, and it “smote the image on its feet of iron and clay, and broke them in pieces.” The golden head represents Nebuchadnezzar himself, who is to be succeeded by kingdoms of lesser power (silver, bronze, iron), and finally a kingdom that is divided and will ultimately be replaced by the Kingdom of God. The idol’s “feet of clay” have come to symbolize the weak point that leads to a seemingly strong or famous person’s downfall.

A fly in the ointment. Ecclesiastes again. In the 10th chapter, the prophet says that just as “dead flies make the perfumer’s ointment give off an evil odor,” “a little folly outweighs wisdom and honor.” We think of a fly in the ointment as the error or obstacle that ruins a good plan.

Writing on the wall. Once again, we have a Babylonian king, and the Prophet Daniel, to thank for a common expression. At a great feast, Belshazzar, identified in Daniel 5 as Nebuchadnezzar’s son, defiles gold and silver goblets from the Temple of Jerusalem by using them to drink wine and toast the gods of gold and silver. Suddenly, a disembodied hand appears and writes a cryptic message on the palace wall. Daniel, who already had a reputation for interpretation, was called in. Proving that he could “read the writing on the wall,” which foretold the division of Belshazzar’s kingdom, Daniel was made a ruler of the Babylonians. Rembrandt found the story to be a good one to tell in painting (above). Now, whenever we see a foregone conclusion coming, we say we can “read the writing on the wall.”