Exclusive photos: On guns and rosaries in New York City

Saturday, March 2 marked the kickoff of the 40 Days for Life prayer campaign in Lower Manhattan. The campaign is one of peaceful prayer and devotion, with the intention of the conversion of hearts and healing of wounds caused by the effects of abortion. Typically the groups involved meet for Mass and Adoration followed by a Rosary procession to a local clinic to bear witness to their faith-filled response to this spiritual war.

New York, having recently enacted one of the nation’s most expansive abortion laws, codifying the practice as a “right,” has prompted many more to join in this prayer initiative as the lives and souls of so many are at stake. Some believed that due to the change in the law that handed the pro-abortion side their perceived victory, abortion supporters would no longer bother protesting the prayer campaign.

That belief was wrong.

In fact the level of resistance was so intense it required the NYPD to stand between those processing and those protesting. The protesters did everything in their power, short of being arrested, to block the prayer groups’ passage towards the clinic. The police had to continually force their way up the entire route to allow the procession to proceed. 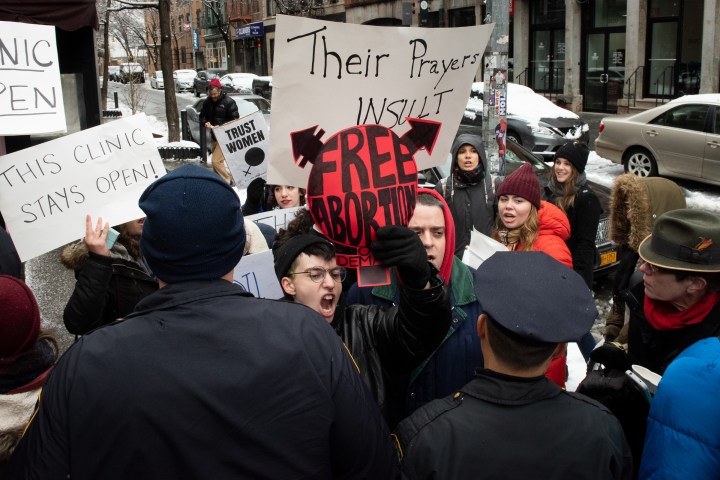 The intensity level wasn’t the only thing that had changed, though. The chants and slurs hurled at the prayerful were made more directly at the Church and the priest leading them than about abortion rights. The message was clear; this was a protest against their prayers.

Religious persecution comes in many forms, but always for the same reason: evil’s resistance to good. And the best response when confronted with evil in whatever form it arrives in is prayer. Evil doesn’t fear violence, hatred or malice … it fears love, and it fears those who love God and their prayers.

This was a day when someone carrying a rosary needed to be protected by someone carrying a gun. But as the sun set on this broken city, the heroic witness of faith and the prayers for those most in need of mercy did not go unanswered. The grace that heals will come, as long as the faithful persevere in their prayer.

“Blessed are you when they insult you and persecute you and utter every kind of evil against you [falsely] because of me. Rejoice and be glad, for your reward will be great in heaven. Thus they persecuted the prophets who were before you.”