“Sackcloth Wednesday”: This is how Lent used to begin 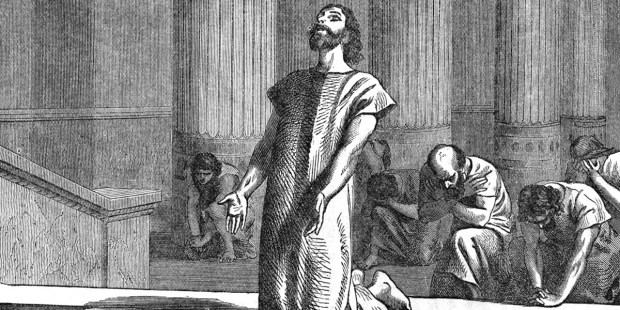 Though only the “public sinners” had to engage in this practice, it didn’t end after one day.

Catholics around the world are familiar with Ash Wednesday, the day and corresponding liturgy that marks the beginning of Lent. On that day the priest imposes ashes on the forehead of the individual while saying the words, “Repent, and believe in the Gospel” or “Remember that you are dust, and to dust you shall return.”

It is a potent reminder of our mortality and a call to repentance, urging us to turn away from our sins to embrace a life of virtue.

Initially this ritual was much more involved and was reserved for “public sinners,” who were required to perform public penance so that they could be admitted back into communion.

In imitation of the prophets of the Old Testament, these penitents wore sackcloth throughout the entirety of Lent, along with ashes on their heads. The St. Andrew Daily Missal explains exactly what happened on this “Sackcloth Wednesday.”

In this custom we have the remains of an ancient ceremony referred to in the Roman Pontifical. Those Christians who were guilty of grave faults had to undergo public penance.

Accordingly on Ash Wednesday, the Bishop used to bless the sackcloth which was to be worn by the penitents during the holy Forty Days, and place upon their heads ashes made from palms used the previous year in the Palm Sunday procession. Then, while the faithful were singing the Seven Penitential Psalms, “the penitents were expelled from the holy place on account of their sins, just as Adam was driven out of paradise because of his disobedience.”

They were not allowed to put off their penitential garb or to re-enter the Church before Holy Thursday after they had gained their reconciliation by toil and penance, and by sacramental confession and absolution.

Read more:
7 Penitential Psalms to meditate on during Lent

Sackcloth is generally described as a piece of coarse fabric that originally was worn next to the skin, making it uncomfortable and somewhat painful to wear. Later on, this fabric was worn only on the outside of their clothing as a public but less painful sign of their repentance.

Eventually the sackcloth was no longer used and ashes were prescribed for all the faithful, inviting everyone to make an effort during Lent to repent of their sins and believe in the Gospel.

Read more:
Where do the ashes on Ash Wednesday come from?