Why breastfeeding in public is modest 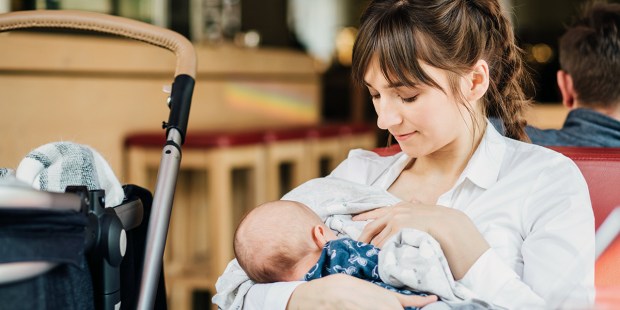 Nursing your baby, wherever that needs to happen, is fundamentally about your intention.

I don’t love nursing my daughter in public. She’s wiggly, and always manages to get a finger up my nose when my guard is down. And even though I’ve never detected judgey-eyes from anyone, people are a little afraid to look at me. They don’t want to make me uncomfortable, or appear to be staring.

I don’t have much choice. The baby gets hungry at the library just as often as she gets hungry at home, and I can’t see my toddler putting up with hanging out in a public bathroom for 15 minutes when we’re out, so I have to accept the fact that some people are going to be a little uncomfortable when I nurse my baby.

Sometimes I feel guilty about that. Am I being somehow immodest? I don’t enjoy making people uncomfortable. But the more I do it, the more I see that breastfeeding — public or private — is as near to the definition of modesty as anything could be. And while I don’t breastfeed to make a statement, the act itself sends a message about a woman’s body that the world really needs and it’s this:

It’s not about you.

First things first: Modesty is about so much more than how we dress. In a nutshell, modesty is just telling the truth about yourself. It’s about helping the world to see you the way God sees you — as a complete person with unchangeable value, never a means to an end, never a thing to be used.

So flaunting anything — whether that’s your skin, your shape, your money, or your all-kale diet — is immodest. That’s because those things aren’t the source of your inherent dignity. Acting as though your value is based on any of those things tells a very dangerous lie.

Immodesty is manipulative. Instead of resting in our value, we take something wonderful — beauty, talent, intelligence, power — and try to convince the world that we deserve to be loved because of that thing we’ve got. Modesty knows “I am worthy of love”; immodesty tries to elicit a response from the world — love, or if it can’t get that, attention and admiration.

So where does breastfeeding come into all this? Well, it’s a radically simple act. You’re just feeding a hungry baby. You’re using your body in accordance with a logical function, to meet a need. It’s snuggly and sweet (unless somebody sticks a finger up your nose), but it’s also purely practical. Breastfeeding tells the truth about your body: that you have a body, that it makes milk, and that your baby needs and loves it.

You’re probably not breastfeeding to show others how good you are at motherhood. Who does that? You’re not trying to be sexy, or make people uncomfortable, or draw attention to yourself. You’re just trying to get some calories into that baby. If you do happen to be drawing attention to yourself, that’s not the point of what you’re doing.

Because modesty is a virtue, it hinges on your intentions. All the virtues work that way. If you make a remark that looks like kindness, but it’s actually a clever passive-aggressive snub, you don’t get points for being loving. Likewise, if your best attempt at a loving gesture falls flat and gets totally misunderstood, you were still being loving, no matter how it came across.

While I get why breastfeeding in public might look like I’m trying to get a reaction out of people, that’s a misunderstanding I can’t control. It’s truly not about anyone else but my baby. No matter what skin I might be showing, that makes it about the most modest thing I can think of.

Read more:
10 Ways a dad can help his breastfeeding wife