Why do Catholics give up things for Lent? 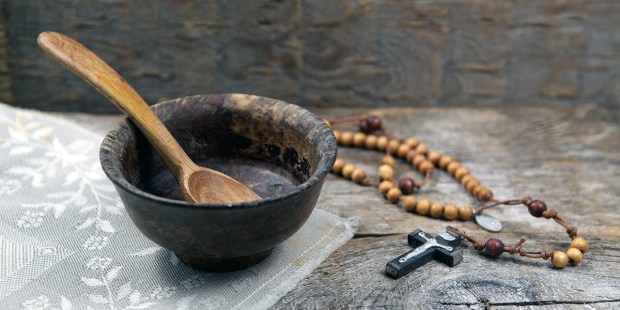 Here is a brief explanation of this popular Catholic Lenten practice.

For many Catholics around the world, Lent is a time to “give up” something for the 40 days. What’s given up could be a type of food, such as chocolate or coffee, or a habit a person wants to quit, such as excessive smoking. Whatever it is, Catholics almost instinctively associate the need to abstain from a particular thing with Lent.

Lent is a time to accompany Jesus into the desert, imitating his example of prayer and fasting. Jesus’ regimen was quite rigorous in the wilderness, as St. Luke explains how he “was led by the Spirit into the desert for forty days, to be tempted by the devil. He ate nothing during those days, and when they were over he was hungry” (Luke 4:1-2).

Keeping in mind Jesus’ act of fasting (though realizing most humans can’t abstain from all food for 40 days), ever since the 5th century a wide variety of Lenten sacrifices have been practiced. According to early Church historian Socrates, Christians from various regions maintained different sacrifices.

Some abstain from every sort of creature that has life, while others of all the living creatures eat of fish only. Others eat birds as well as fish, because, according to the Mosaic account of the Creation, they too sprang from the water; others abstain from fruit covered by a hard shell and from eggs. Some eat dry bread only, others not even that; others again when they have fasted to the ninth hour (three o’clock) partake of various kinds of food.

For many centuries it was the custom to eat a single meal a day in the evening, with both meat and wine forbidden during the entire 40 days.

However, fasting regulations have changed over the centuries, allowing greater freedom for personal choice when it comes to Lenten sacrifices. The Roman Rite Church in the United States currently dictates fasting and abstinence on Ash Wednesday and Good Friday and abstinence on all the other Fridays during Lent, for those who are obligated. Every other “sacrifice” that an individual engages in falls under the realm of personal choice and should correspond to a person’s abilities and state in life.

Giving up something for Lent is a powerful way to imitate the sacrifices of Jesus in the desert and to unite our heart with his in prayer. While Catholics are technically not obliged to make such a sacrifice, the Church has always encouraged the faithful to do something to enter into the penitential spirit of Lent more deeply.

By making such sacrifices, we remind ourselves that we are not made for life on this earth, but are called to something greater. It is up to us to make good use of our time and to find ways to refocus our attention on God, choosing the narrow road that leads to eternal life.

Read more:
Lent challenge: Get rid of 40 things in 40 days

Read more:
The surprisingly secular meaning of the word “Lent”