Should we beware the Ides of March? 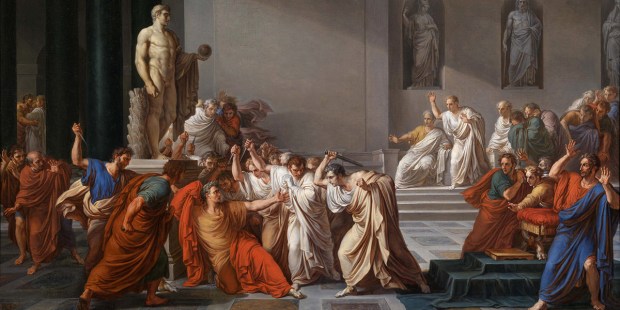 The day Caesar died has lived on for millennia.

Maybe if you’re superstitious. Like not going out on Friday the 13th.

But the Ides of March—that’s today—is like any other day. It’s just that a good story has legs. And Shakespeare did a pretty good job of securing the Ides of March a place in our common cultural consciousness.

According to Plutarch, Julius Caesar, the dictator who ruled the Roman Empire from 46-44 B.C., was hated for his “passion for the royal power.” He had been warned by a soothsayer to “Beware the Ides of March,” but he pretty much laughed it off. On his way to the Senate on what would be March 15 according to our modern calendar, he encountered the soothsayer.

“Well, the Ides of March are come,” he said to him, as if to say, “See? Nothing has happened.”

“Ay, they are come, but they are not gone,” the seer replied darkly.

The rest is history, which made for great drama.

Because of Caesar’s assassination in the Senate that day, the expression “Ides of March” has endured for 2,000 years. Interestingly, it was Caesar who reformed the ancient calendar, wherein the Romans divided months into groupings of days counted before certain named days: the Kalends at the beginning of the month, the Ides at the middle, and the Nones between them.

Caesar’s new calendar came to be known by his own first name: the Julian. As a testament to his enduring legacy, the Julian calendar is still followed in parts of the world, notably by some Eastern and Oriental Orthodox Churches, as well as some Eastern Catholic ones. The Gregorian calendar, introduced by Pope Gregory XIII , is merely a new and improved Julian calendar.

Has the day been tarred by other tragedies, which might suggest that it’s a good idea to stay home when March 15 rolls around? History shows a mixed record for the Ides of March:

1493 – Christopher Columbus returns to Spain, concluding his first voyage to the Western Hemisphere.

1848 – Hungarian intellectuals stage bloodless revolution in Budapest against Austro-Hungarian empire. It is put down by Russian troops the next year.

1917 – Czar (the Russian equivalent of “Caesar”) Nicholas II of Russia abdicates after enduring a humiliating defeat by the Germans. The Russian state and military begin to dissolve.

1937 – The world’s first blood bank is established at Chicago’s Cook County Hospital by Dr. Bernard Fantus. It is a breakthrough for surgical procedures and emergency treatments.

1965 – President Lyndon B. Johnson, responding to the Selma crisis, tells Congress, “We shall overcome,” while advocating the Voting Rights Act.

1990 – Mikhail Gorbachev is elected as the first President of the Soviet Union.

1992 – An earthquake in eastern Turkey kills an estimated 800 people.

Caesar may have been felled by the knives of senators concerned about his growing hunger for power, but he has not been forgotten. He changed the course of the history of the Greco-Roman world “decisively and irreversibly,” Brittanica notes. “The Greco-Roman society has been extinct for so long that most of the names of its great men mean little to the average, educated modern person. But Caesar’s name, like Alexander’s, is still on people’s lips throughout the Christian and Islamic worlds. Even people who know nothing of Caesar as a historic personality are familiar with his family name as a title signifying a ruler who is in some sense uniquely supreme or paramount—the meaning of Kaiser in German, tsar in the Slavonic languages, and qayṣar in the languages of the Islamic world.”

And we remember him not only on March 15. We should recall Julius Caesar in summer as well. While he was still alive, the Roman month Quintilis, in which he was born, was renamed “July” in his honor.