The celebrated museum celebrates its 200th anniversary in 2019.

This year marks the 200th anniversary of the Prado Museum in Madrid, Spain. Since its beginnings, it has grown to include thousands of works of art, including around 8,200 drawings, 7,600 paintings, 4,800 prints, and 1,000 sculptures.

Designed by architect Juan de Villanueva in 1785, the building that houses the Prado today was constructed for the Natural History Cabinet by order of King Charles III. His grandson, King Ferdinand VII, encouraged by his wife Queen Maria Isabel de Braganza, turned it into the Royal Museum of Paintings and Sculptures, which in time was renamed the Museo Nacional del Prado.

The Prado is home to some of the best known paintings in the world, including Bosch’s “Garden of Earthly Delights,” “The Nobleman with His Hand on His Chest” by El Greco, “Death of the Virgin” by Mantegna, “The Holy Family” (known as “The Pearl”) by Raphael, “Emperor Carlos V on Horseback” by Titian, “The Foot Washing” by Tintoretto, “Self-portrait” by Dürer, “Las Meninas” by Velázquez, “The Three Graces” by Rubens, and “The Family of Carlos IV” by Goya.

The Prado has more paintings by Titian, the godfather of Venetian painting, than any other museum. 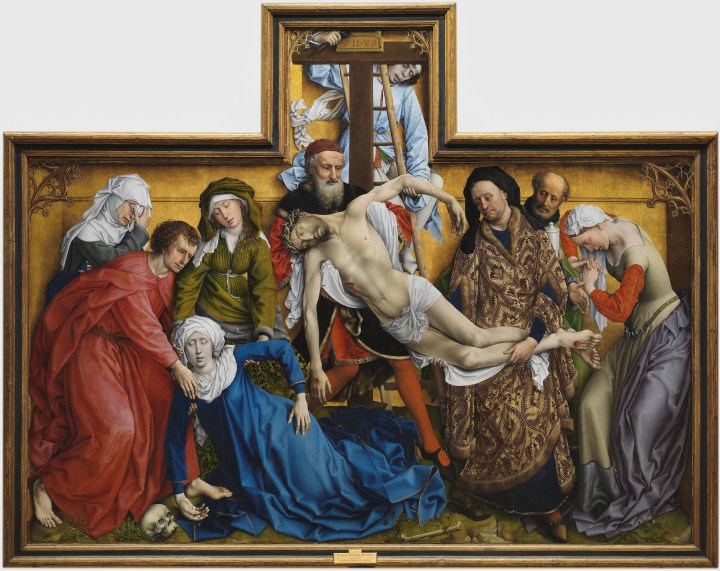 New York Times travel writer Andrew Ferren, who moved to Madrid just to be near the Prado, has made countless visits to the museum, but with the bicentennial coming up, he attempted to walk through the entire institution in one day, to make sure he hadn’t overlooked anything. It might be a good time to do so, before the opening this year of a major addition, the first since 1918.

Not all the works in the Prado have religious subjects, of course, but the museum is one of the best place to view paintings of spiritual-themed subjects.

“One work not to be missed is Rogier van de Weyden’s ‘Descent from the Cross,’” Ferren writes. “Instead of revealing a window into another realm, the artist’s shallow pictorial space pushes the nearly life-size figures taking Christ’s body off the cross into our world, making the pathos—translucent tears stream down several faces—all the more powerful.”

Launch the slideshow to see some of the other highlights of the Prado’s religious artwork.

Prayer for this evening
Top 10
1
Domitille Farret d'Astiès
Attacked with acid as a baby, Anmol Rodriguez overcomes and inspi...
2
Philip Kosloski
How Our Lady of La Salette can give us hope in darkness
3
Philip Kosloski
An alternative Hail Mary to Our Lady of Sorrows
4
Philip Kosloski
Pray this Psalm when you successfully recover from an illness
5
Cecilia Pigg
7 Ways the saints can help you sleep better at night
6
Philip Kosloski
Your body is not a “shell” for your spirit
7
Philip Kosloski
Why do some Eastern Catholics use spoons for Holy Communion?
See More
Newsletter
Get Aleteia delivered to your inbox. Subscribe here.