The Holy Stairs that Jesus climbed to reopen in April

For at least 40 days the worn stairs will remain uncovered, allowing pilgrims to touch and climb the ancient marble steps.

For many centuries, pilgrims visiting Rome have made an important stop at the Pontifical Sanctuary of the Holy Stairs, a staple of the Roman pilgrimage. There, surrounded by walls ornamented with beautiful frescoes, they ascend the hard marble stairs on their knees while praying and meditating on the Passion of Jesus. 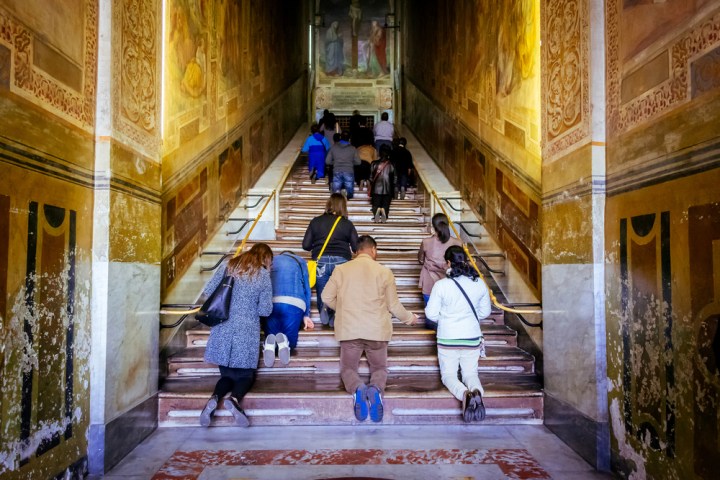 The popular devotion is based on an ancient Christian tradition that tells us that St. Helena, the mother of Emperor Constantine, had the 28 steps which Jesus is said to have climbed on the day he was sentenced to death by Pontius Pilate transported to Rome in 362.

Little of the marble steps is usually visible, however, as the steps have been covered by wall-to-wall sections of walnut boards, which have protected the original marble from being worn away by the millions of faithful who climb the steps. Now, for the first time in 300 years, the boards will be left off, the Tablet reports, for at least 40 days.

Pilgrims climb the steps, known as the “Scala Pilati” or “Scala Sancta” (Pilate’s Stairs or the Holy Stairs), on their knees as an act of penitence. Perhaps it is due to the abundance of visitors, or maybe it is because they spend extra time ascending the steps on their knees whilst praying, but large indents have been scored on the marble, leaving deep grooves formed by the weight of countless faithful.

Surrounding the Holy Steps are some 18,300 square feet of frescoes featuring stories from the Old and New Testament. Installed in 1589 by Pope Sixtus V to educate pilgrims visiting the stairs in their faith, the frescoes have grown dingy and in need of repair.

“Since the faithful often did not read or write, the stories came to life” through images, Mary Angela Schroth, a Rome art gallery curator, told Catholic News Service.

Many who climb the steps spend little time examining the frescoes, as their focus tends to be on the ancient steps. However, Paul Encinias, director of the Rome-based Eternal City Tours, believes this lack of awareness may be because pilgrims are better educated than 100 years ago, and less reliant on visual instruction or lessons.

With the once-in-a-lifetime chance for an intimate encounter with the ancient marble we believe once supported the weight of Christ — and thus the weight of the world — it is possible that the beauty of the frescoes will continue to go unappreciated. At least for another 40 days.