Digital projection shows exhibit the long and storied history of the Eternal City.

The city of Rome is steeped in cultural history that is impossible to overlook, as every building, statue, and street corner tells another chapter of the city’s long story. To tourists and visitors the monuments and architecture are themselves beautiful, but it takes a vast amount of historical knowledge to piece together the puzzle of the nearly 2,800-year-old city. They say it takes a lifetime to see Rome, but thanks to modern technology, it’s easier than ever to get a glimpse into the city’s storied past.

The Eternal City is currently going through what Forbes describes as a “digital Renaissance” as curators combine modern technology with ancient archaeology to bring history back to life. Video projectors cast images of the past over ruins, multimedia light shows capture the imaginations of crowds, and 3D visors reveal virtual reconstructions of the oldest monuments and structures.

These productions are thanks, in large part, to the Rome-born physicist, Paco Lanciano, who found a way to educate with his passion for cultural communication. Lanciano believes that if you make education fun it is easier to learn and retain knowledge. He told Forbes:

“You need to strike a balance between creating something spectacular to hold an audience’s attention while also helping them learn in the process. But, it is easier said than done.”

Over a decade ago, Lanciano began working with Piero Angela, a leading Italian television host and science journalist, to design the digital show “Palazzo Valentini,” which offers an immersive multimedia visit to “Le Domus Romane.” This virtual show vividly brought to life the ancient baths, furnishings and decorations utilizing projections to exhibit the history of the palace, without compromising the structure.

“The experience was surprising because these two worlds – technology and archaeology – had never overlapped before. In Italy, there has always been a separation between science and the humanities, but science is part of culture, too. The purpose of science is to understand, just like the purpose of archaeology is to understand,” Mr. Lanciano said of his early project. “There is no reason to separate these two fields and in fact, bringing them together can yield very positive results.”

The success of the “Palazzo Valentini” led to a greater collaboration between Lanciano and Angela. They came together again to produce the “Viaggio nei Fori,” two shows that project the stories of Emperor Augustus and Julius Caesar onto the ancient forums each summer night. These shows have become vastly popular and are a staple of summer tourist months. They are viewable from April 21 to November 11, 2019.

Now, Lanciano, not one to rest on his laurels, has created an even more ambitious production of theatrical education, “Welcome to Rome.” The 30-minute introduction to the city is cast along three walls, with three-dimensional models of some of the city’s major landmarks depicted in the center of the theater.

“Welcome to Rome” begins thousands of years ago with a handful of scattered tribes and quickly moves through the many eras of Rome: the Roman Republic, the Roman Empire, the Middle Ages, the Renaissance and finally the present day. The fundamental idea of “Welcome to Rome” is that providing context of the city’s history will lead to a greater enjoyment of their many landmarks. “It was quite a challenge to synthesize the story of Rome, but the feedback has been very positive,” Lanciano said.

“This is precisely my method: to let people experience the pleasure of discovery and understanding,” Mr. Lanciano says with enthusiasm. “Experience is the basis of learning so it should be enjoyable. I always want to encourage people to learn more. There’s nothing more tedious than something you cannot understand. Boredom is my enemy.” 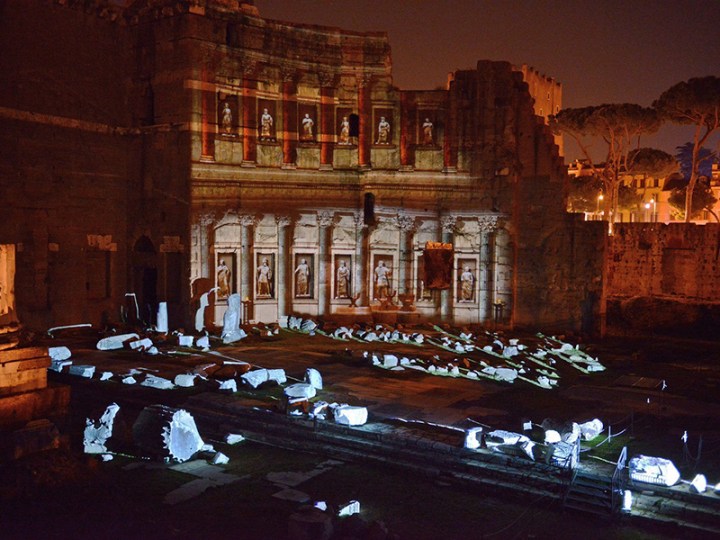