It is popularly believed that the cave was originally used by the Knights Templar.

Hidden within a small wooded area on a privately owned Shropshire farm lies a small hole in the ground. Only large enough for a grown man to enter on his hands and knees, the hole is easy to miss, but it leads to a cavernous chamber carved into rock.

Known the locals as the Caynton Caves, the site features pillars, bays, and apses carved into the sandstone bedrock. The walls of Caynton are adorned with many centuries worth of carvings, including two crosses of the Knights Templar, the famed Catholic soldier-monks who rode off to the crusades in the Middle Ages.

Alongside the crosses are more recent carvings of pagan symbols and even some inscriptions made by vandals who used the site for “black magic” rituals. It was the presence of this element that led the owners of the farm to close the site to the public in 2012.

The original purpose for the cave is lost to us now. While the presence of the Knights Templar symbol suggests the cave has been around since the 12th century (when the Knights Templar were founded), experts, however, have dated the cave to between the 18th and 19th century. Instead, they believe it is little more than a “folly,” or an architectural work of art with no greater function than its beauty.

Photographer Michael Scott, from Birmingham, saw a video on the caves and decided to visit the site for himself. He told BBC:

“I traipsed over a field to find it, but if you didn’t know it was there you would just walk right past it. Considering how long it’s been there it’s in amazing condition, it’s like an underground temple.” “I had to crouch down and once I was in it was completely silent. There were a few spiders in there but that was it. It was raining so the slope down was quite sludgy but inside the cave was bone dry,” he further added.

From the dating alone it would seem unlikely that the Knights Templar were responsible for the cave’s creation. While their members did include English noblemen, the order was officially dissolved and banned by Pope Clement V in the 14th century, due to military decline and political pressure applied by King Philip IV of France. But it is possible the cave was hewn by the ancestors of the Crusaders, wishing to honor their service to the Church. 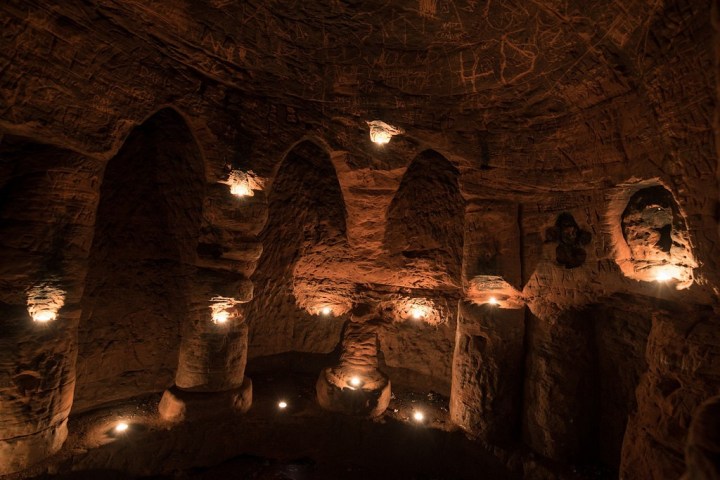