Whatever happened to the woman at the well? Some traditions tell us 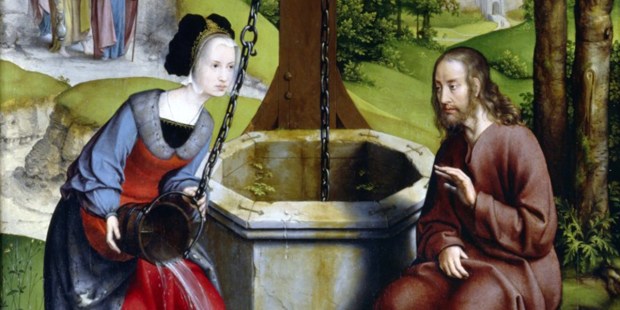 The woman, a Samaritan at that, represents all of us as the new bride.

Whatever is Jesus doing up in Samaritan hill country, at a well, with a woman, alone?

She, at least, surely couldn’t have imagined it at the time, but Jesus is meeting a future saint of the Eastern Church, St. Photina. For now, she is not yet aware of meeting the savior of the world.

The story (John 4:1-42) begins with his thirst, her bucket, and perhaps hints at why she went to the well in the first place, after having seen a strange man.

If you were a good Jewish boy from an average Jewish village you would have been warned to stay away from Samaritans, let alone Samaritan women. A snatch of folk lyric always comes to mind when I read this account: Leave them downtown women alone.

Jesus, alone, is at the well in the noontide heat and a Samaritan woman comes out, alone. Clearly, this looks like a woman to avoid.

There is a feeling in the story that what she wanted you couldn’t take home in a bucket, and maybe for good reason. This appears to be the way John deliberately shaped his Gospel: Jesus is the new bridegroom and the woman, a Samaritan at that, represents all of us as the new bride.

Read more:
Brother Isaiah’s “Love Song for the Bride” is balm for a wounded Church

This is happening at Jacob’s well, on the plot of ground Jacob gave to his son, Joseph. There is a history of romance around this well (Genesis 29:11). This is the spot where Jacob first met Rachel. He swept her up and kissed her. John’s scene intentionally resembles Jacob and Rachel, only no kissing. Pointedly, it happens at the same well.

There are some things to admire about her. She’s feisty, isn’t she? She is bold enough to remind him of what separates them, he a Jew and she a Samaritan, and audacious enough to assert what connects them, their mutual ancestor, Jacob. In their verbal sparring she invokes the coming Messiah who will explain all things to them both.

Jesus talks persuasively of thirst and living water. “Sir, give me this water, so that I may not be thirsty or have to keep coming here to draw water.”

Sure, but first, your life must flash before your eyes.

“You have had five husbands,” he points out, “and the one you are with now is not your husband.” Ouch. Nothing hurts as much as the truth, people say.

Is this why she is at the well alone, because she is ostracized and shunned? She is not welcome to accompany the village women in the morning? She must wait? She has no village companions to hear her story, wipe her tears, or help her laugh? She has embraced scandal and has no place to go?

How does somebody go through five husbands, or five wives?  This just isn’t the sort of thing that normally should happen to normal people. A woman with five former husbands and a live-in-at-the-moment, something’s wrong. One could make some very harsh judgments here. How would she fare under Twitter and Facebook scrutiny?

Some people get themselves in awful fixes they can’t get themselves out of; fixes not always of their own making, but fixes nonetheless. And once in a fix, it is so hard to break the pattern.

What does this woman at heart truly seek? She wanted out of her fix, I’d suppose. So, in the noontide heat, alone, she sees a new guy at the well and saunters up bringing a bucket.

It is Jesus who confesses his thirst, but she recognizes her thirst as well. In knowing that need, she glimpses a healing reality and a true escape from the fix she’s in.

She is not much regarded in the biblical interpretations of western Christians. That five husband’s thing, I think, sort of diminishes any respect for her. But among other Christian communities she is remembered.

Among Eastern Churches she is St. Photina, honored as a martyr and an equal of the apostles, for she was the first to summon others to the thirsty man at the well, wondering if he might be the Christ.

Jesus tarries in the Samaritan village two days. “Many in the village came to believe in him because of the woman’s testimony.”

On another day, a Friday noon, Jesus will again confess his thirst. He will not receive the sweet water of Jacob’s well, only sour wine squeezed from a sponge. After the Third Day, his disciples will remember this encounter of water and woman at Jacob’s well. Only then will they announce to the world what the Samaritan woman had already learned: Jesus is the drink to satisfy our thirst for eternity.

Read more:
How the Eucharist can connect us to our deceased relatives and friends