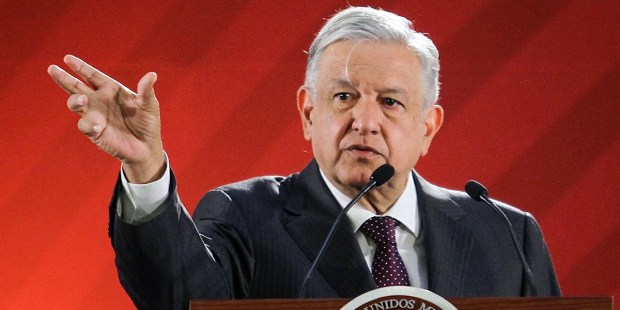 López Obrador is unlikely to push for legalization now, as he needs Catholic Church to help fight violence.

Andres Manuel López Obrador did a good job keeping the abortion issue out of his campaign for president of Mexico last year. But he might be confronting it now.

At a recent celebration for International Women’s Day, the Mexican President had to deflect charges that he wants a referendum on abortion.

According to Mexico News Daily, López Obrador, at an International Women’s Day event at the National Palace, said his administration will never seek to restrict women’s freedoms. But he said that referenda will be used to democratically resolve controversial issues.

“We can’t forcefully declare ourselves [in favor of or against] an issue because this is a democratic movement and we represent all the schools of thought and all women, believers and non-believers,” López Obrador said March 8.

In response, a group of women wearing green handkerchiefs—which has become the symbol of the campaign for abortion rights in Latin American countries—shouted, “rights are not up for consultation.”

Citizens’ Movement lawmaker Martha Tagle, accompanying the protestors, said she is seeking “a clearer position” from López Obrador “on issues such as violence against women,” a reference to abortion rights in cases of rape.

Gálvez said that although López Obrador has not taken a public stand on abortion, he has appointed pro-abortion officials to two key government posts. He is not likely to call for a referendum anytime soon, Gálvez said, because he is asking the Catholic Church in Mexico to help “make peace in the states, to lower the levels of violence we are experiencing in the whole country.”

Some lawmakers in the ruling Morena party, which is led by the president, are calling for women to be able to legally access abortions during the first 12 weeks of pregnancy. The party is divided over the issue, however. Lilly Téllez, a Morena party senator from Sonora, is vehemently opposed to legalizing abortion.

“A woman who aborts is punishing herself in a very severe way, she’s a criminal, she’s murdering a baby,” she said, according to Mexico Daily News.

Téllez said she will present a proposal to Congress to “protect all individuals from conception onwards.” Abortion should never be allowed, she said—even in cases of rape, when deformities have been detected in the unborn baby or if the mother’s life is in danger.

Morena has sufficient votes in congress to begin a constitutional reform process to decriminalize abortion up to 12 weeks, UPI reported. But López Obrador said he does not want the government “imposing” an abortion law on the country without the public’s approval.

For the first time, leftist lawmakers have a majority in both houses of Congress, according to the Economist.

Several proposals to decriminalize abortion have been submitted to Congress recently, Al Jazeera reported. One, presented by Partido de la Revolución Democrática legislators, would set no time limit on abortion.

“This could mean abortion just before the baby is born,” said Gálvez.

“The anti-life feminist argument is weak and insubstantial in support of their claims,” commented Luis Martinez-Guzman, founder and president of the International Human Rights Juridical Center in Mexico and a representative in Latin America for Human Life International. “In particular, the maternal death statistics for Mexico City show that said maternal deaths have not diminished, even though abortion is legal there since 2007.”