The unexpected secret ingredient for a happier marriage 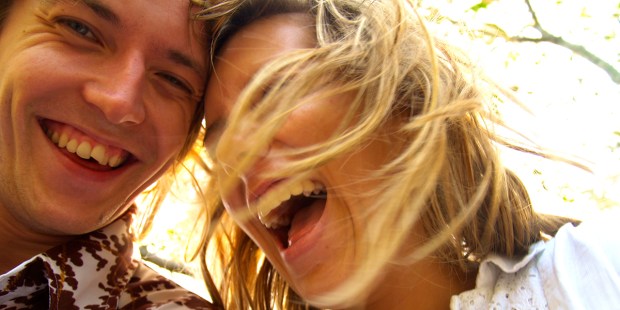 Things work best when both spouses share the same sensibilities about this one thing.

Science has already established the benefits of laughter to our health and well-being. It helps us fight stress, pain, and challenges. Laughter is the fountain of youth par excellence!

German psychologists at Martin Luther University in Halle-Wittenberg have shown that this is also true for married couples.

In a study published in the Journal of Research in Personality, the authors explain that spouses who share their sense of humor, regarding laughing and being laughed at, tend to be happier than others. However, spouses that are afraid of even some good-natured ribbing are relatively less happy in their romantic relationships.

The researchers distinguish three characteristics: being afraid of being laughed at, enjoying being laughed at (such as when that laughter is intentionally provoked by the person being laughed at), and laughing about others (which can range from good-natured jokes to ridicule).

The researchers carried out the study with the cooperation of 154 couples. In the interviews, carried out online, each spouse separately described in detail his or her perceptions of their relationship and their degree of emotional and sexual satisfaction. A first analysis of the data showed, according to researcher Kay Brauer, “that partners are often alike with regard to their individual characteristics and also their profiles.” The more alike they were in these characteristics, the more likely they were to be content in their relationship.

Especially in women, the trait of enjoying being laughed at was associated with them reporting being more satisfied with their relationship and more attracted to their partner, the researchers said. Conversely, when one of the spouses enjoyed ridiculing others, it caused more arguments and less relationship satisfaction.

However, the researchers pointed out that having the same sense of humor and ability to laugh at oneself and at each other is not sufficient alone to determine if a relationship will be satisfactory.

This sounds like another case of science proving something we pretty much already knew: having a healthy sense of humor about yourself and your own foibles makes for a healthier relationship; at the same time, it’s important that our laughter at others always be good-humored and respectful, taking into account the sensibilities of the other person.