Since 1978 “Puy du Fou” has been re-creating salient moments of French history with live theater shows performed by 2,000 actors and live animals.

In 1978, Philippe de Villiers, a French dramatic arts student, wanted to recreate salient moments of French history with a theater show. Around this time, he happened to come across an abandoned estate near the village of Les Epesses in the region of Vendée, which had been the setting of an important battle during the French Revolution. In 1793, the people of the Vendée rebelled against the revolutionaries, forming the “Royal and Catholic Army,” which had the Sacred Heart as its symbol. 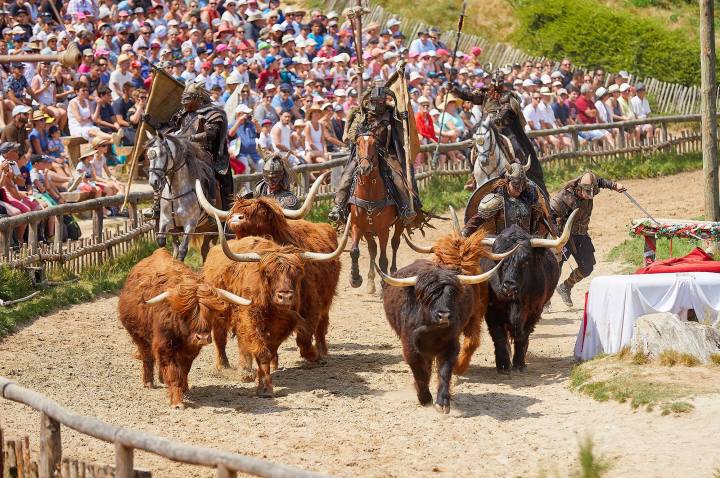 Impressed by such historical heritage, Villiers adopted the estate as the setting of his show. More than 600 actors joined him in Les Epesses, giving rise to an epic theater show called Cinéscénie.

Today, that same abandoned estate has been turned into one of the most wondrous historic theme parks in the world. “Puy du Fou,” literally “peak of madness,” recreates key moments of French history over a 135-acre reserve dotted with ancient amphitheaters, castles and farms. An estimated 2,000 volunteers dressed up as revolutionaries, farmers and priests entertain the park’s daily visitors, which add up to 25,000 during peak season.

Theater shows and live performances recreate specific moments of French history: gladiators fighting for their freedom in a Roman amphitheater, musketeers fighting for medieval kings, Vikings riding their longships. As Gaëtan Favreau, a representative for Puy du Fou, told the National Catholic Register, the shows are a way to help visitors connect with their roots. “Human beings always need to feel they are from somewhere; they need to feel that they belong to a community with its own habits and traditions” he said. “This community is, in fact, called civilization.”

One of the highlights of “Puy du Fou” performances is the Cinéscénie, an epic family saga that follows the adventure of a local family from the 14th century up to the Second World War. For many visitors, learning about local history means to learn about a brutal chapter of the French Revolution, when the French revolutionary army crashed the Catholic resistance.

That’s why when the rest of the country celebrates the anniversary of the French Revolution on July 14, people in Vendée honour the local “commander-saint,” Jacques Cathelineau, who was killed while fighting for the Church.

As observed by Thierry Equinoxe, head of a “Puy du Fou” fan club, visitors to this historic theme park cannot fail to realize that France’s history is inextricably linked to that of Catholicism. “In every French village, there was a church,” he told the National Catholic Register. “The birth of France is based on the faith.”