Why you shouldn’t sleep in on weekends 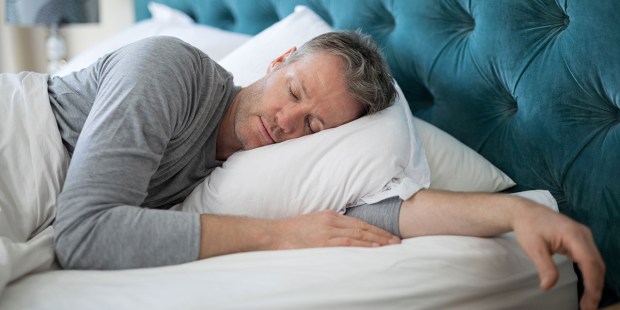 Getting a full night of sleep, every night, is far from an indulgence — it’s actually an act of love.

Sleep is something I used to take for granted. Even when my kids were babies (with the notable exception of one, who screamed for the first year of his life), I regularly got eight hours of sleep. On the rare occasions when I got seven, I would be sleepy and a little cranky the next day. If I got six, I would be short-tempered and miserable. Less than 6 and I was basically an angry zombie.

Life is much different now. My youngest is 3, so I don’t have to worry too much anymore about middle-of-the-night wakeup calls. But my work schedule means I get up around 4:15 most mornings — sadly, not for a 30-minute baby snugglefest followed by an extra hour of sleep. I get up and stay up, working for an hour and half before my kids are even out of bed, then getting them to school and moving on with my day.

I get way less than 8 hours of sleep during the week now. I aim for seven and usually manage about five and a half. By Friday, I’m so exhausted that I usually fall asleep before my kids do and sleep for a solid 10 to 12 hours. After all, I have to catch up on my sleep, right?

Not so much. According to Time magazine, you can’t actually catch up on lost sleep — and trying to can be more detrimental to you health than losing sleep was in the first place:

Research has suggested that a person would actually need four days of adequate rest to make up for even one hour of sleep debt. Since many people get less sleep than they need just about every weeknight, Dr. Cathy Goldstein, an associate professor of neurology at the the University of Michigan Sleep Disorders Center, says it’s almost mathematically impossible to close that gap over only two weekend nights. “The sleep debt is just accumulating over time,” she says.

But Goldstein says fatigue isn’t the only consequence of an erratic sleep schedule; it also disrupts your circadian clock, an internal system that regulates hormone levels to promote sleep at night and alertness during the day …“there are health risks to any degree of circadian disruption,” Goldstein says. The effects have been best documented among night shift workers, whose non-traditional schedules are associated with cancer, cognitive decline and early death. But circadian rhythm shifts can affect your health no matter what your schedule is, research suggests. The new Current Biology study found that sleep-deprived people snacked more after dinner and experienced negative metabolic changes compared to people who got enough sleep for 10 days in a row, and those changes could not be fully corrected through weekend sleep.

I wish I could say I’m surprised by this, but that would be a lie. My relationship with sleep is very different now that it’s no longer something I can get anytime the kids are sleeping. It’s something I have to prioritize by regulating my own behavior — which is, frankly, a lot harder than regulating my kids’ bedtimes.

On bad weeks when I get fewer than 6 hours of sleep several nights running, I can feel the effects on my brain and body. Not only am I physically fatigued and noticeably weaker, I’m also a cognitive train wreck. Tasks that normally take 20 minutes can stretch to a full hour or longer. I lose things constantly, my brain too frazzled to remember to put them in the right place and way too frazzled to remember where I thoughtlessly left them instead. I definitely tend to eat more, and even find myself snacking throughout the day … a habit I eliminated years ago.

Sleep is necessary to help us function at our best — not just cognitively, but also spiritually and emotionally. When we’re too exhausted to take care of ourselves, it’s impossible to take care of others. Getting a full night of sleep, every night, is far from an indulgence — it’s actually an act of love. It’s a way to care for ourselves so that we can, in turn, care for our families the way we should — calmly, patiently, lovingly.

I knew that my erratic sleep schedule wasn’t good for me because I can feel the effects, but I honestly didn’t think much about the effects it might be having on my circadian clock. I attributed mental fuzziness and fog to lack of sleep, never thinking about the cumulative effects of the lack of sleep — or worse, the way so many circadian rhythm shifts might have a negative impact on my spiritual and emotional health that would spill over into my family.

So even though I’ve known for a while that I need to get serious about regulating my time in the evening so that getting to bed by 9 is my highest priority, I haven’t been serious about actually doing it. After all, those precious few hours of mindless laundry-folding or Facebook-scrolling are the only downtime I get all day.

But you know what worse than losing my “downtime”? Losing my patience with my kids — not just once in a while, but every day. Several times a day. Losing the calm, steady relationship with  my children that took me so many years to built. Losing the ability to care for my family in the best possible way I can, because I’m no longer truly caring for myself.

So tonight I solemnly swear to start getting to bed by 9 p.m. … no matter what is done or left undone. Whatever it is, I’ll be better prepared to handle it after a solid night of sleep. In fact, I wouldn’t be surprised to find that all the little crises that derail my days — and my patience — don’t seem like crises at all when I’m well-rested and calm. In fact, they might just be unexpected opportunities to love and support my family.

Read more:
A psychiatrist’s 5 tips for getting better sleep