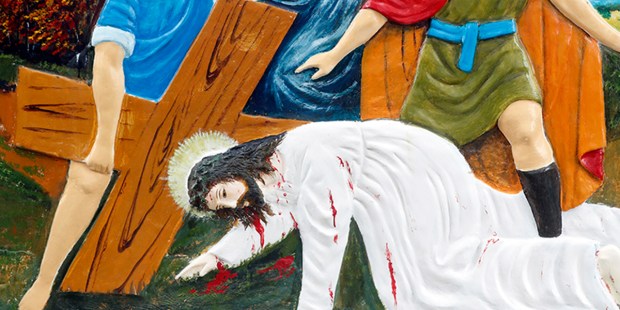 He attempts to pin down the cause of Christ’s death using modern medical understanding.

In an April 4 talk, Dr. Timothy Millea examined the last 18 hours of Jesus’ life and the strain his body was put under during his Passion and crucifixion. The Catholic surgeon determined, from the accounts of the Gospels and images of the Shoud of Turin — believed to be the burial shroud of Christ — that the most likely cause of his death was blood loss.

Catholic News Service reports that the doctor explained that the human body contains about 1.5 gallons of blood, and to lose just 40% of this puts one at risk of hypovolemic shock, a life-threatening condition. After a full night of beatings, scourging at the hands of Roman soldiers, and his ultimate crucifixion Jesus likely surpassed this threshold.

“Christ emptied himself,” Dr. Millea told about 100 people at his home parish of St. Paul the Apostle in Davenport. “As a surgeon, two words that make our hair stand on end are ‘bleeding out.’ If you can’t stop it, you can’t keep that patient alive.”

Dr. Millea took the audience through an hour-by-hour account of the physical ramifications of such merciless torture, from the emotional Agony in the Garden of Gethsemane, to Jesus’ crucifixion. Millea said:

“Some people ask, did Jesus really die of physical factors, or did he — as God — say, ‘OK, my work is done.’ How he lived this long is one of the biggest divine mysteries.”

He said that his interest in the topic arose when he read a 1986 article “On the Physical Death of Jesus Christ” in the Journal of the American Medical Association. In his research into the matter he found that this discussion has been taking place since the 16th century.

In examining the Shroud of Turin, Dr. Millea pointed out that the man buried in this shroud stood 5’10” and weighed about 175 lbs. Tradition tells us that Jesus was whipped 39 times, but the figure in the Shroud of Turin displays nearly 400 wounds, all of which were bleeding on the day of his death.

While tradition numbers 39 scourges, the Romans most likely used a flagrum, a whip made of leather cords 2 feet long tipped with metal objects, broken glass and lead balls. Each swing of the flagrum held the potential to leave dozens of wounds. “It was a very diabolically effective means of harming the tissues down to muscle depth,” said Millea.

The crown of thorns could also have created many wounds, as it was most likely much larger than the coronet we see in artistic depiction. Millea said the thorns were probably more like a helmet. “Every time the soldiers hit the thorns, they impaled in his scalp. If you’ve ever had a cut on your scalp, you know it bleeds like crazy.”

Of the cross, Millea said that Jesus was most likely only carrying the cross beam, as the entire cross would have weighed upwards of 300 lbs. He said, “You’ve got a 175-pound man who has been beaten, he’s bleeding, he hasn’t eaten or slept or had anything to drink, and he’s going to carry 100 pounds for 600 yards. He fell three times? It’s a miracle he didn’t fall more often.”

More blood loss would have come when the nails were driven through his wrists. Millea notes that they would not have gone through the hands, as they would not have been able to support his weight. Instead the nails would have gone through a spot in the upper wrist where the ligaments are strong — this is where the Shroud of Turin shows the nail wounds. Dr. Millea did note that the pain of puncturing the median nerve would have been intense.

Millea acknowledged that other physicians and historians have speculated that Christ’s death may have been due to asphyxiation, because breathing was so difficult on the cross, or even from a heart attack after experiencing such intense trauma for so long.

The surgeon did not throw these theories out, but he did say that blood loss is not only a medical explanation, but a scriptural one as well. Jesus took the place of the slaughtered lambs of the Old Testament sacrifices and the cause of death for sacrificial animals was also blood loss. This coincides with the Last Supper, at which point Jesus took the place of the sacrifice.

He described events of Jesus’ Passion and death as “a tragic story, a horrible story, a painful story,” but as he ended his presentation he showed an image of the resurrected Christ, reminding the audience that “this story doesn’t end with where we finish tonight.”