How old is Palm Sunday? 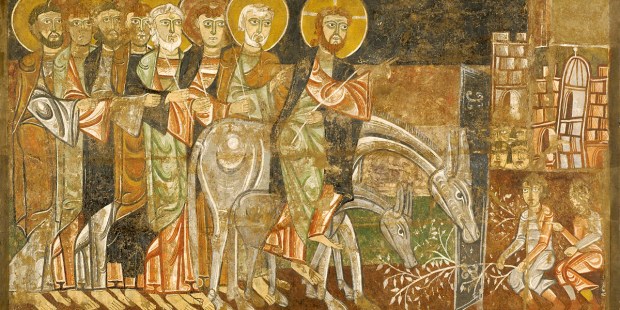 The blessings and processions of palms go back deep into early Christianity.

Palm Sunday, officially referred to as Palm Sunday of the Lord’s Passion, marks the beginning of the Christian Holy Week, commemorating Jesus’ triumphant entrance into Jerusalem before his arrest, crucifixion, and resurrection. In most churches, palms are blessed and used in processions, but the core of the liturgy is a lengthy reading of the Passion, often with parts taken by the priest, lectors, and the whole congregation. It is in this reading where we find the passages of the Gospel of Matthew narrating how palm branches were placed in Jesus’ path and waived at him as he entered the city. Christian iconography would then use the image of the palm branch (or palm leaves) to represent the victory of martyrs, Jesus himself being the martyr par excellence. After the liturgy, Catholics take their palms home to serve as sacramentals. Next year, they will be burned to serve as the ashes for Ash Wednesday. But how long have Christians included palms in their liturgical commemoration of the beginning of the Holy Week?

According to records, by the 8th century the liturgy of Passion Sunday was already quite elaborate. People would take their palms to a first church where the liturgy would begin, would walk in procession to a second church were the blessing of the palms took place, then returned to the first church where finally three deacons would read (chant, actually) the Passion. Of course, consequent renovations of the liturgy would modify this celebration throughout the centuries, finally arriving to the canonical form used today.

But there is an even older document in which we already find Christian communities celebrating Palm Sunday around the 4th century in this very same way (that is, going in procession from one church to the other). This document, the famous Itinerarium Egeriae (“The Travels of Egeria,” also known as Peregrinatio at Loca Sancta, “Pilgrimages to the Holy Places”), is a long letter addressed to a circle of women “back home.”

Egeria’s identity has been widely disputed. Some early editors of Egeria’s work identify her with St. Sylvia of Aquitaine. Some claim she was, rather, a nun living in Gaul during the reign of Justinian, since she addresses her account to her “sorores” (Latin for “sisters”), but it is also known the term is popularly used by Christians to refer to their Christian acquaintances. It might be the case she was a lay woman too, since this kind of pilgrimage was not uncommon by then. Moreover, the fact that Egeria was able to go on such a long and expensive trip (and her good writing and extensive knowledge) has led some scholars to think she might have been an upper-class wealthy woman of her day. Her writings describe her journeys around the Holy Land, beginning in Mount Sinai and ending in Constantinople, with a three-year-long stay in Jerusalem.

It is here, in Jerusalem, where Egeria saw these early celebrations of Palm Sunday. We reproduce her account here:

On the next day, that is, the Lord’s Day, which begins the Paschal week, and which they call here the Great Week, when all the customary services from cockcrow until morning have taken place in the Anastasis and at the Cross, they proceed on the morning of the Lord’s Day according to custom to the greater church, which is called the martyrium (…) It is called the martyrium because it is in Golgotha behind the Cross, where the Lord suffered. When all that is customary has been observed in the great church, and before the dismissal is made, the archdeacon lifts his voice and says first: “Throughout the whole week, beginning from to-morrow, let us all assemble in the martyrium, that is, in the great church, at the ninth hour.” Then he lifts his voice again, saying: “Let us all be ready to-day in Eleona at the seventh hour.” So when the dismissal has been made in the great church, that is, the martyrium, the bishop is escorted with hymns to the Anastasis, and after all things that are customary on the Lord’s pay have been done there, after the dismissal from the martyrium, every one hastens home to eat, that all may be ready at the beginning of the seventh hour in the church in Eleona, on the Mount of Olives, where is the cave in which the Lord was wont to teach.

And when the ninth hour approaches they go up with hymns to the Imbomon, that is, to the place whence the Lord ascended into heaven, and there they sit down, for all the people are always bidden to sit when the bishop is present; the deacons alone always stand. Hymns and antiphons suitable to the day and to the place are said, interspersed with lections and prayers. And as the eleventh hour approaches, the passage from the Gospel is read, where the children, carrying branches and palms, met the Lord, saying “Blessed is He that cometh in the name of the Lord,” and the bishop immediately rises, and all the people with him, and they all go on foot from the top of the Mount of Olives, all the people going before him with hymns and antiphons, answering one to another: “Blessed is He that cometh in the Name of the Lord.” And all the children in the neighbourhood, even those who are too young to walk, are carried by their parents on their shoulders, all of them bearing branches, some of palms and some of olives, and thus the bishop is escorted in the same manner as the Lord was of old.

If you want to read the Pilgrimage of Etheria, you can find an online version of the text here.