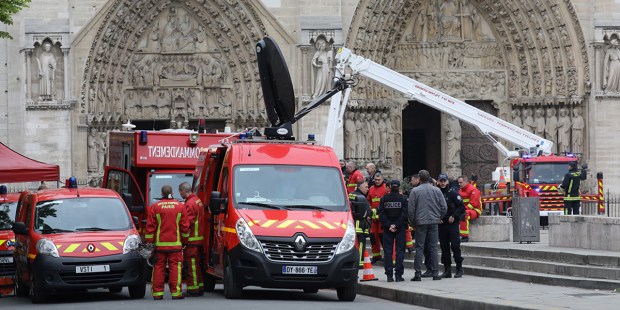 Built with the help of French fire fighters, it’s Colossus the robot pompier!

Now that the fire is out and we know that many of Notre Dame’s precious relics have been saved, we can marvel at the 400 pompiers — or firefighters as we call them in English — who risked their lives running into the cathedral, uncertain whether the burning roof above them would collapse. As more pictures emerge of these firefighters tackling the horrific blaze Monday night, we can begin to appreciate the determination of these brave men and women as they did their very best to save the historic cathedral.

Even though no lives were at risk — pilgrims were led to safety earlier in the evening — these soldats de feu, or “soldiers of fire” as they are also referred to, were relentless in their efforts as they battled for nine hours to keep Notre Dame standing. Yet, they did have a helping hand, or more like a helping hose, in the guise of a 500-kilo robot named Colossus.

The robot, described as “little” in the French press, had the role of putting out the fire, or at least reducing the temperature in the scorching nave to help the firefighters gain access.

Built by Shark Robotics with the help of the fire department, the incredible piece of machinery has many roles: it acts as a water cannon, can help evacuate the wounded and transport vital material, and can even make an inspection of an area thanks to its gas detectors and video. On Monday night when the flames made the nave impenetrable, Colossus made its entrance, controlled from a distance by firefighters.

The modular piece of equipment was able to target both specific and more widespread areas thanks to the different settings on the cannon. Measuring over five feet long, the robot rolls on caterpillars and can even climb stairs.

The creation of Colossus just over two years ago supplied a fantastic tool in the arsenal needed to combat fires. While it can never replace trusty firefighters, it can help keep them safe and, as demonstrated in the fire at Notre Dame, can play a vital role in fighting dangerous and devastating fires. To see Colossus and the pompiers in action, have a look at the video below.

Read more:
The three relics of Christ that were kept at Notre Dame are safe

Read more:
‘He made straight for the relics’: Firefighter chaplain saves Crown of Thorns