“God saved me,” says a cardinal who was tortured and condemned to death 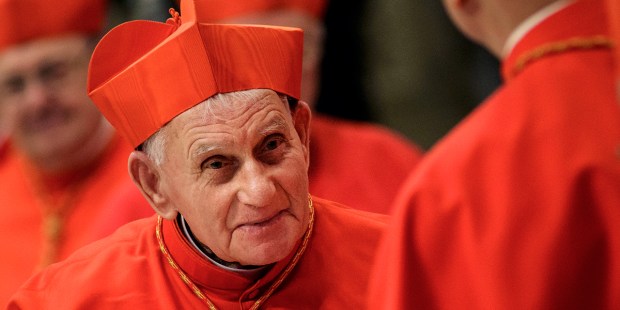 He suffered persecution under the communist regime in Albania.

He’s 91 years old, he lives in Florence, and he’s been a cardinal since 2016. Cardinal Ernest Simoni, from Albania, spent 11,107 days as a prisoner, much of that time in forced labor. He’s the only living priest witness to the persecution unleashed by the communist regime of Enver Hoxha, who proclaimed Albania the “first atheist state in the world.”

On April 7th, 2019, Cardinal Simoni celebrated the 63rd anniversary of his priestly ordination. He often visits communities in different dioceses to share his dramatic testimony. His most recent visit was earlier this month, at the Chapel of the San Giovanni-Addolorata Hospital in Rome. “They did everything to eliminate me, but the Lord never abandoned me,” Cardinal Simoni says. “I was condemned to death by hanging, but God saved me.”

“They were at the point of breaking my arms”

He was arrested on Christmas night in 1963, after celebrating Mass, just because he was a priest. “Four policemen took me away by force; they were at the point of breaking my arms,” the cardinal said, recounting how he was arrested by the communist authorities because he performed exorcisms and because he had celebrated Mass for the repose of the soul of American president John F Kennedy, who had been assassinated the previous month.

Simoni was imprisoned, tortured, and condemned to death, a sentence that was commuted to 25 years of forced labor. He regained his freedom only 1990, when the Communist Regime fell.

Despite his sufferings, he never stopped praying for his persecutors, because “anyone who says he loves Jesus, must love him always, and when we say that Jesus is alive, it’s not mythology: it’s the truth. He is the one who gave me the strength to face prison.”

He puts special emphasis on the importance of forgiveness, because that is what “brings Jesus into the world.” He has never used words of hate or resentment towards his jailers, because “only love conquers.”

He celebrated Mass while he was a prisoner, using bread that he baked on his own, and grapes that he crushed with his hands to make wine he could consecrate on the altar.