The isle of Iona, birthplace of Christianity in Scotland

There are few locations that have caused so many non-believers to question their non-beliefs.

At just over three square miles, Iona is less than a fifth the size of Manhattan. In terms of religious significance it is far bigger than the world’s richest island. Last month I mentioned the effect that Chartres Cathedral had on the pioneer TV art historian Sir Kenneth Clarke. This month, 50 years after it was first broadcast, it’s time to look at the frosty British presenter losing the stiffness of his upper lip as he recalls Iona having more than anywhere “a sense of peace and inner freedom.” 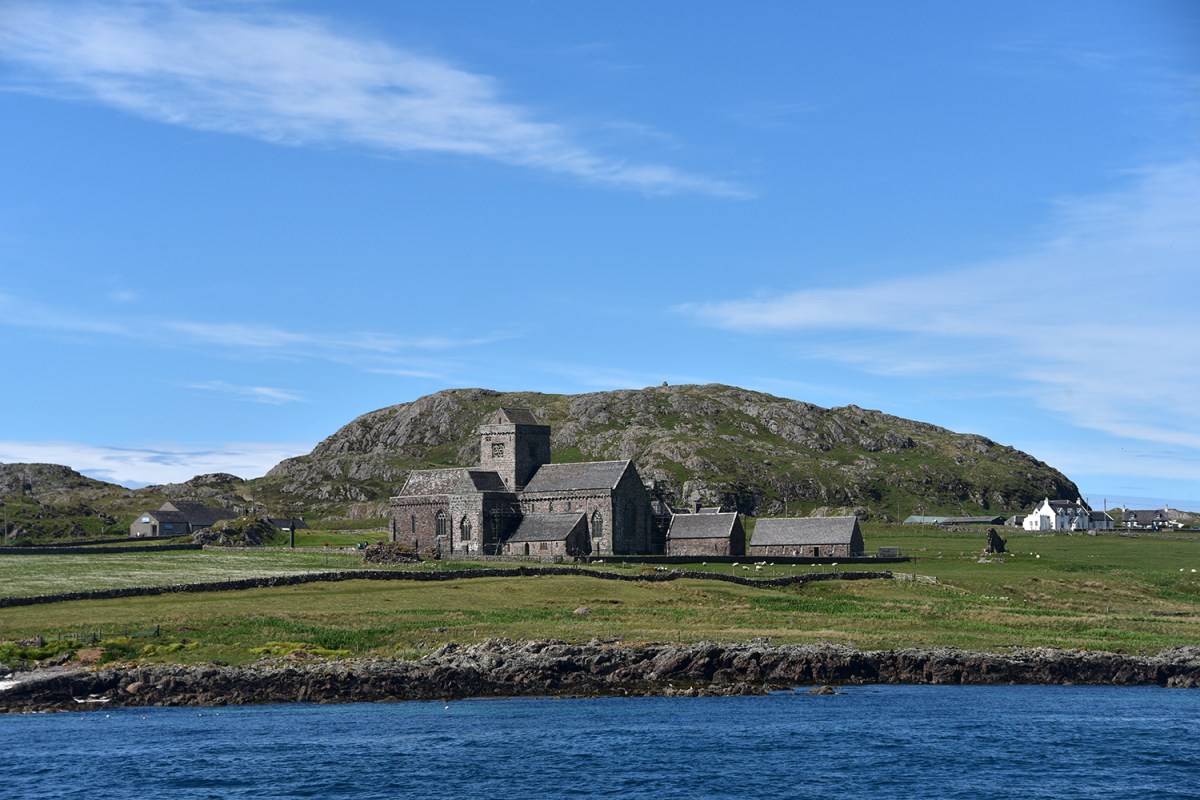 That was the island of Iona back in 1969, when the beaches were deserted and Sir Kenneth could stride unimpeded across the sand in his tweed raincoat. It has hardly changed since then, and there are few locations that have caused so many non-believers to question their non-beliefs. Iona tops most atheists’ lists. Its white sand and aquamarine sea are less exciting to sun worshipers than to those looking for spiritual awakening. It’s not completely inaccessible either. For a starker view of early Christianity, purists might prefer the Irish island of Skellig Michael. The producers of the most recent Stars Wars epic, The Last Jedi, opened many eyes to the Celtic church by providing a sight of grizzled old Luke Skywalker on that near-vertical island.

The religious community of Skellig Michael was hardy rather than influential. Iona presents fewer physical challenges and has a gentler feel of the divine; there is even some genuine ecumenism going on there. Most visitors are there for the island’s past, though, as this was the starting point of Christianity in Scotland. There is very little left of this history apart from the island’s crosses. There were 360 stone crosses on the island before the Protestant Reformation, which ensured that almost all were thrown into the sea. The three survivors continue to attract pilgrims, tourists and art historians.

The classic “Celtic” cross, with a circle around the meeting of upright and cross bar, is thought to have originated on Iona. From there it seems to have traveled to Ireland, where Reformation zealots were given less of a chance to push them into the sea. The inspiration for a cross with a circle is still unclear. It might have been a purely practical response to the structural weakness of wide stone arms. Other theories suggest origins in the Coptic church, which would have meant a very long journey from north Africa.

It’s not hard to see influences from the Middle East in some of the decoration of the crosses. This is also visible in painted works such as Iona’s most famous piece of creativity. The Book of Kells is named after an Irish monastery, but all the specialists agree the manuscript started life in the monastery of Iona.

As with so much that went wrong with Iona, the Vikings got there before the Reformation vandals, and they did even more damage. St. Columba and his Irish monks moved to the island in 563. These were some of the darkest days for Christianity, made worse by continual Viking raids. There was little contact between the Christians of the Celtic fringe and those of Rome. The lack of communication didn’t mean that borders were not fluid – especially in watery places such as the Inner Hebrides. As late as 1266, Iona was part of the Norwegian kingdom. It then became part of the kingdom of Scotland. This was 200 years after the Normans (more Norse people) had taken over England in the memorable year of 1066.

Communication and travel between Ireland and Scotland had always been frequent. The sea was a bridge rather than a barrier. Ferries today take tourists the short distance to the Scottish mainland in ever-growing numbers. What has been lost over the years is the independent dynamism of the Celtic church. This was once the most vigorous root of that Christian tree planted in Europe by St Peter. Nowadays it is a picturesque relic. The landscape is as serene as ever, sadly without the community of monks and nuns that used to populate the island.

Iona has much in common with Scotland and Ireland, which both had large populations in their remote places. Famine and land clearances drove a huge number of their inhabitants away. Most of them made their way to Australia and North America, where memories of those bleak outposts have been romanticized over the centuries. Iona’s population had been devastated during the Reformation, much earlier than that of Ireland or the Scottish mainland. Nowadays it is fewer than 200 souls, which is still a lot more than Skellig Michael: Population 0.

These Celtic backwaters are more than ever a powerful force for spiritual renewal, especially among those émigrés who yearn for ancestral lowering skies that do not conceal the ubiquity of the Almighty. George Lucas managed the theme of renewal by somehow putting Mark Hamill and a film crew on the very small island of Skellig Michael. Iona is larger and much more accessible. Once again, it is the words of Kenneth Clark that bring Iona to life: “I never come here… without feeling some God is in this place.” For him it might have been even more important that the holy men of this island “kept western civilization alive.”