As the darkness fell on the city on evening of Holy Saturday a crowd gathered on 156th Street before the doors of the Friary Church of St. Anthony. A church that was shuttered for decades on a street, once littered with debris and burnt out cars, framed by boarded up buildings; a street that became the stage for what would be an incredible portrayal of the power of faith to a neighborhood in dire need of resurrection.

A small fire burns outside the doors of the church casting its light on the faces of those close enough to feel its warmth. Unlike the fires that tore through and threatened to destroy the borough some 40 years earlier, this little fire brings with it the promise of rebuilding the community through Grace and healing. 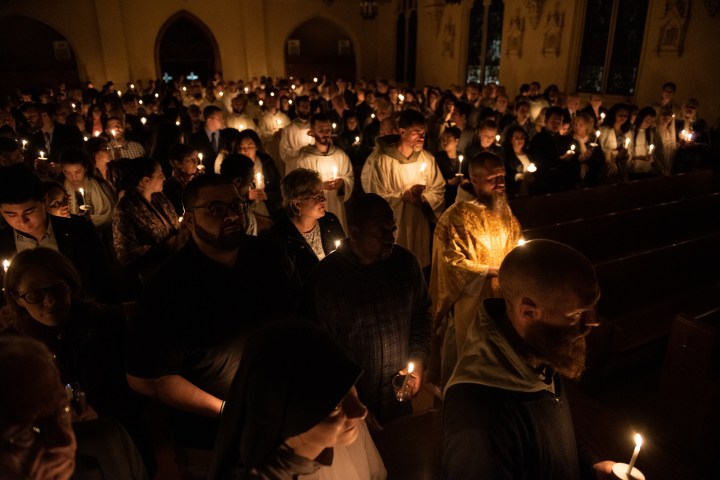 A new candle is touched to the flames and is passed to others clinging to their candles symbolizing the “Light of Christ”…and as the light increases the darkness flees.

As the candles are transported through the old wooden doors into the darkened church their light reflects off of the ceiling, revealing the faces of the saints whose images peer down upon the faithful like parents would upon their children.

The light grows brighter until the cavernous space glows. As a city without its people is merely a collection of structures, a church without the light of Christ and His people is just a building.

A lone voice pierces the silence chanting the Exsultet (Easter Proclamation) bringing to a close the Service of Light while proclaiming the new life of Salvation through the Resurrection of Christ.

Since the origins of the practice around the 11th century, the Easter Vigil has become one of the most important celebrations in the Church, recalling the Resurrection of Jesus Christ and the gift of Salvation that has been passed to us.

Around the world the celebration invites us to remember.

But perhaps most importantly, the faith that resurrected this small neighborhood in the South Bronx, and resurrected the lives of so many within its community, continues to burn brightly in the church throughout the world each and every day. The reality of the Resurrection of Christ isn’t a once a year thing at all, it’s a reality that enflames hearts bringing hope to the hopeless, redemption to the sinner and reveals God’s unquenchable love for us and His burning passion for our Salvation.

It’s in this, that the fire of hope burns brightly; a Hope that never fades and never yields, a hope that brings light to the depths of darkness. A hope that will always prevail.

So on this cloudy night the shadows fall away as the light of tens of thousands of candles in parishes around the city are lit, once again, bringing the Light of Hope to New York City.