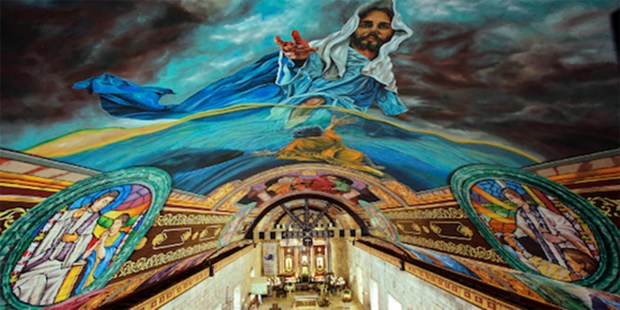 The priest says that the work follows in the medieval tradition of “visual catechism.”

Just days before the beginning of Holy Week, the Sts. Peter and Paul Parish Church on Bantayan Island in the central Philippines saw the completion of an ambitious mural. The impressive work of art stretches across the ceiling from wall to wall and is being compared to the Sistine Chapel in both scope and artistic design.

The project was the brain-child of Father Joselito Enriquez Danao, Pastor of Sts. Peter and Paul, who came up with the idea while the government’s National Heritage Commission began the task of restoring the old 19th-century church and convent. “While I was watching the restoration, I noticed that the ceiling was bare and plain,” the priest told La Croix International.

Father Danao believes the notion of God is so “profound” that the use of visuals could help people to “comprehend and understand the love and the forgiveness of God.” After seeking approval for the mural, Father Danao began looking for an appropriate artist, whom he found in the most unlikely of places.

While visiting a local bar, Father Danao noticed a mural painted by a local artist, Aris Avelino Pastor. Father Danao said, “When I looked at [the mural], it was really impressive. The people had realistic eyes.” The priest approached Pastor, who was quick to accept.

Pastor had always dreamed of a project just like this. He said that when he was asked to paint the ceiling, “the hair all over [his] body stood on end.” He told La Croix:

“When I was a kid, my mother often bought us children’s books with drawings of Jesus’ life and the lives of the saints.” When he was informed of the Bantayan church project, the artist said he was “eager to do it no matter at what cost.”

The lead artist gathered a team of 12 others, and together they created a work of art that covers 1,130 square meters. Those who worked on the team said that braving the scaffolding was daunting, but they weren’t afraid. Ana Nikolai Mendoza, the only woman in the group, said she had to conquer her fear of heights to complete the work.

“I feel blessed. It was the opportunity of a lifetime,” she said. “I am happy I am leaving a legacy to the people of Bantayan.”

The completed mural is split into many sections, which begin with the arrival of Catholicism to the islands that would become known as the Philippines, nearly 500 years ago. What follows are images that depict the foundation of the parish, arrival of the missionaries, pirate raids, and many other historical events significant to the Church in the Philippines.

The Gospels are also represented in the murals. Fittingly, the closer one is to the altar, the more images of Christ are seen. These depictions range from the birth of Christ to his Passion and death on the cross.

Father Danao calls the murals “visual catechism,” referencing the medieval practice of teaching the faith through paintings, as the general public was not commonly literate in those days. While the average faithful of today can read and write, Father Danao says, “I hope the visuals, the mural, will touch something in the lives of people and give them hope.”

The mural was made possible from the generous donations of the congregation, one of whom donated $9,500 to see the painting complete. Initially the effort was underfunded, but as people began to see some of the panels finished, and photos began to go out over social media, there was a much greater drive to donate.